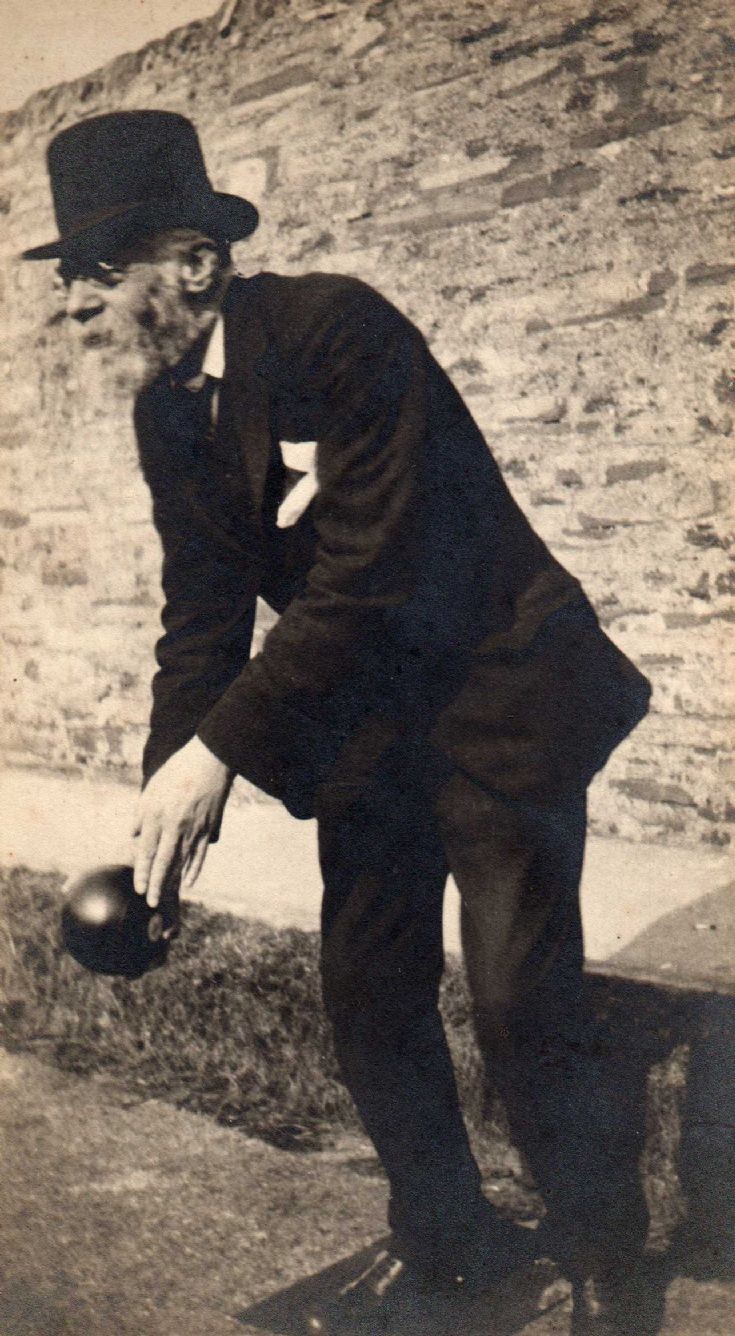 William Donald Peace (1860-1916), proprietor and editor of the "Orkney Herald" newspaper and publisher of many books about Orkney.

His obituary states that he was a bachelor, of a shy and retiring nature and delicate health, an "advanced Liberal" and a bowler, and had an extensive knowledge of English literature.

In the centenary edition of the paper, in 1960, Robert Rendall wrote: 'The editor, William Peace, became somewhat of a local figure. He wore an old-fashioned top-hat, rounded on the edge of the crown, and he could be seen daily standing in the doorway of the shop, with "glasses" perched precariously on his nose as he gave a sharp glance right or left when looking out on the street. In appearance he commanded respect, and his weekly leaders were always shrewd and forthright.'

View Large Version
Picture added on 09 January 2012 at 09:19
Related Sites: Kirkwall East Church
Comments:
A 'top-hat, rounded on the edge of the crown' must surely have a name of its own. Stovepipe? Sugarloaf? All I can say is that although Mr Peace was a bowler that's certainly not a bowler on his head.
Added by Ian Hourston on 09 January 2012
Actually I think the hat is a variant of the bowler called a Cambridge, after the Duke of Cambridge who first had one made for him in 1865. Like a bowler it is made out of hard felt, but has a squarer shape. The top hat (usually made of silk at that time) was not rounded at the edges of the crown. Perhaps the most famous wearer of the Cambridge was Winston Churchill, who wore one when he was an "advanced Liberal" like Mr Peace, and was still wearing one as a Conservative elder statesman.
Added by Paul Sutherland on 11 January 2012
My researches (ie a spot of Googling and a look in two trustworthy dictionaries) haven't turned anything up on the Cambridge hat, apart from pics of the Duchess of that ilk wearing a rather fetching number and of Winston Churchill wearing the type of hat we're discussing but with no name attached. However, I won't dispute your point Paul. Drop the crown a bit, and round it off more, and Mr Peace's hat would become a bowler (which is not named for its bowl shape, as I had always supposed, but after its alleged inventor, a hatter called Bowler). Top-hats had a very distinctive shape, wider at the crown than at the hatband, and I think Robert Rendall used the term a little inaccurately in this instance. 'Tall' or 'high-crowned' might have been better. Oh, the delights of hair-splitting!