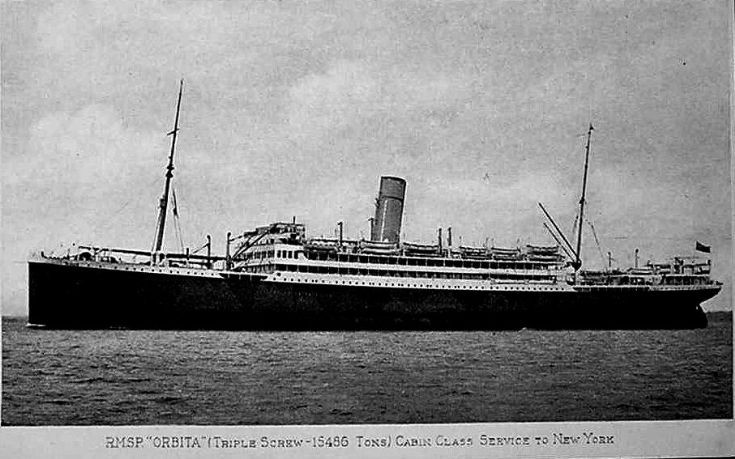 I was reading the comments on picture #25587, the Wilson/Ross dinghy, and wss amused how the comments went from dinghies to a treatise on Orkney wells. The only thing missing was a word about the troopship SS Orbita so I have added a photo of her. She looks very modern for a ship launched in 1914. served a s a troopship during WW1. Commissioned for the mail run to New York, later ferried immigrants from Jamaica, then to Australia and finally ended her days as a troopship in WW2, scrapped in 1950.
Picture taken probably early 1920's
Picture added on 24 September 2011 at 16:32
Comments:
Tom - I put on the photo of my father's dinghy the Orbita. Looking at your photo (and contributor notes)with my mother, she thinks she was at school with you at KGS, 1938-44. She was Tess Slater in those days. She'd be interested to hear from you.
Added by Jane Harris on 27 September 2011
My father who was Canadian came from Halifax Nova Scotia to Glasgow on the Orbita as I recently found a berthing card for the ship dated the early 1940 s so it must have been used as a troopship i guess
Added by Nick Kirkpatrick on 28 September 2012
I sailed from Liverpool to Port Elizabeth S.A. Dec.18th 1940. We were RAF bods and the convoy was shelled by a German heavy cruiser on Christmas morning I believe one ship was hit but the rest sailed on safely, first stop Freetown.
Added by Bill Callen (ex 552127 RAF wireless op.) on 14 July 2014
My family sailed on the Orbita on the 12th of February 1949 from Liverpool bound for East Africa. As an 8 year old this was an adventure of a life time after the hard life in England during and after the war.. It was a trip that I have never forgotten.
Added by Gillian Todd on 05 October 2015
My mother, sister, brother and I went to Kenya on the Orbita in February 1949. Sadly I don't recall the trip as I was not quite three years old. We went to join my father, already out there.
Added by Ruth Steer on 13 February 2018
My father was in the navy. I know he was on the Orduna and I think he was on Orbita. I have been searching for his records but I can't find any anything. His name is Thomas Mc|Ilraith. Can anybody tell me where I can look?
Added by Linda Marshall on 17 July 2018
I sailed from Liverpool in April 1950 to Ceylon,now Srilanka,with my mother and younger sister on the troopship Ss Orbita.I was almost 9 yrs old.My father was in the RAF and already in Ceylon after already serving in the middle East for a few years. He was a aircraft fitter. The journey was so exciting and memorable,especially going through the Suez Canal. We left Ceylon for the UK in Nov 1951 I can remember everything so well ,what an experience. My father's name is William Alexander Tait. Sadly he died in 1968 at the age of 54.
Added by John Alexander Tait on 08 March 2019
My dad was on the Orbita when it sailed as a troopship to Singapore Xmas 1949.....
I have the menu he was given which is 70 years old this December. Dad remembers everything about his service in Malaya which being he has dementia now is quite something bless. John Oram pte 22152842
Added by Jacki Meaney nee Oram on 26 May 2019
Found some contact names from dads army days in Malaya
Sgt Bilbo ... 22275227
Tpr Holloway 22289947
John Oram pte 22152842
Anyone know these people please
Added by Jacki Meaney nee Oram on 24 September 2019
My dad William Harrison was on the SS Orbita. He was amongst troops on an eastern tour. Bound home to England via Ceylon, Arden and Port Said in May 1949
Added by Sharon Harrison on 09 October 2019
My mother, Barbara Foxall, a British Red Cross Welfare Officer, sailed from Port Said to Kenya on the SS Orbita in February 1949. Her letters home describe the ship as being full of screaming babies and having to queue to use the bathroom!
Added by Fiona Nicholson on 13 January 2020
My Father was RAF and Tour ex Singapore mid 1950 and we sailed back on the Orbita with the 2nd Battalion of Cold Stream Guards which was her final voyage before being broken up October 1950 and think she was only working on two of here shafts for the whole of the voyage.

Added by John Fowler. on 24 August 2020
I was on the Orbita aged 2 on 12/2/49 also bound from Liverpool to Killindini With my mother to join my father (RASC) in Mombasa. It was a good job the war was over as I eventually threw all my shoes overboard leaving a trail for any Uboat to follow.
Added by Roger Noble on 28 October 2020
My grandfather, Hugh McKeefery, sailed on the Orbita, from Malta to Liverpool in May 1946. He was 29, and in the merchant navy.
Added by Mandy Stewart on 08 November 2020
My father, Alan Jones. was sailing as an evacuee on the SS Orbita on 18 September, 1940. He was 12 years old and he was travelling from Liverpool to Bermuda. Our family had relatives at the Naval Dockyard during that time. He told me about the night the City of Benares was torpedoed. The children on the Orbita thought the bangs were fireworks. As they were in their cabins below deck, with blackouts on the portholes, they were therefore unable to see the explosions. In the morning they thought, or may have been told, that the ship was no longer in the convoy as it had turned off on a different route for Canada. He spent the war in Bermuda and returned to Liverpool in 1945.
Added by Barbara Lamble on 27 December 2020
<< back