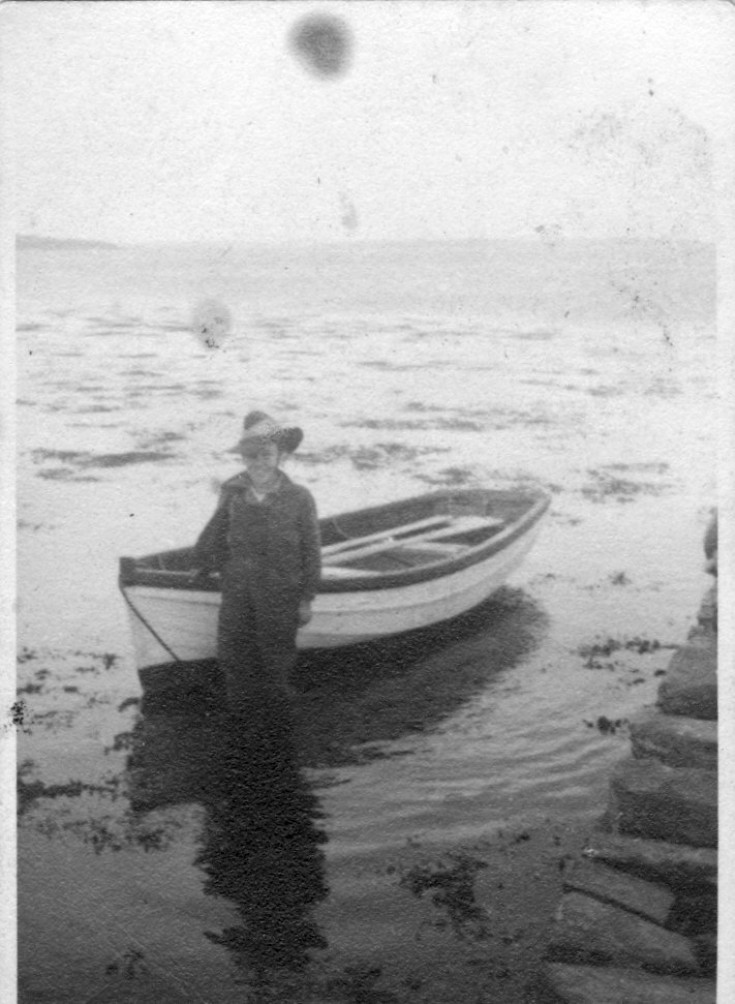 A dinghy built by James Nicolson from the Smiddy in Flotta. It was a apparently used to ferry folk between South and North Ness at one point. In 1906 two local men took it to go to a dance on the North Side and were drowned. Owner was someone from the Peedie Lythes at that point (name??) My father, Walter Ross, bought it from the Chalmers of Rysa Mill, later Haybreck, around 1940 and his father John Ross trimmed it up during the war as it was in quite a bad state. It was named the Orbita after a troop ship on which my father sailed to or from India. John Cload bought it in 1955.

Any idea where the picture might have been taken? Might be the little pier below Wellbraes, now almost gone??

View Large Version
Picture added on 09 September 2011 at 19:27
Related Sites: Longhope Sailing Club
Comments:
My goodness Jane you have your mothers looks but your interest in history and all things related to Hoy, Waas, and Brims must be down to your father Walter Ross who was like the "Encycopedia Orcades".
And speaking o troop ships me faither yoused tae speak o goan tae or from India on a troop ship and was ane o the Castle Line - can anyane help me wae some names, she was the something Castle.
Well done on all that history of a dinghy, as I have said before boats are far more intresting than folk!!.
Added by John Budge on 10 September 2011
I remember a lot of these "bush hats" being around after WW2. They were more suited to the Burmese jungle than Orkney - but they did have a chin strap.
Added by Sandy Windwick on 10 September 2011
Jane you are right , Wellbraes pier I'm sure, it was the best pier in Crockness in my young days, I do remember your dad having that dinghy too but never knew it had a name. There was a well on the beach there too 4 flagstones set into the gravel just above the neap tide high water mark, it was often used if the usual water supply was low. I remember the old folk trying to locate the source of the spring further up the beach, but they never got it, there was another well on the beach as well, between Heathfield and Peatnear.
Added by Jimmy Hamilton on 10 September 2011
The last dinghy our grandfather Malcolm Flett from Garson built was very similar to this one.I was about 12 yrs old the last time I was in her,1952 Two of us (boys) could launch her very easily.She had a greenhart keel and slipped over the rocks just as if she was on rollers, and we could haul her back up again. About 25+ yards at low water. Dad wouldn't ever let us take her out until we loaded her with ballast (fair sized rocks.).We had to place them under the floor boards.I have a photo her with my father in her below Garson. I will post it on here when I find it ( she had lovely lines') A real Flotta lass!!

Added by Stuarts Dad. Rodney Flett on 10 September 2011
Jimmy - my father spoke about 'Mammy Burnie's waal' - would that be the one you refer to? There were Burnies in Crockness mid 1800s, from Fife and Leith according to censuses.

Added by Jane Harris on 12 September 2011
Jane, and Jimmy, Regarding the waals in Crockness my Grand Aunty Bella Thomson lived at "East Moaness" and whur Mitther said watter was a problem in Crockness as the only place there was watter wiz on the beach and big tides filled them wae sea watter.

I have done a fair bit o cultivation in the area ower the years and the sub soil is very red and open and I suppose that was why no watter came near tae the surface also I think that was why Crockness was a bad area wae lightning strikes due tae the red iron okka in the grund.
Added by John Budge on 13 September 2011
Jane, there was another old well just at the Greenburn side of the burn that ran at the end of Wellbraes. It was quite a big well, in the face o' the shore, but I dont ever mind it used in my time. southeasterly gales and high tides used tae fill it wi seaweed and gravel, and would be pretty sure thats the well your Dad spoke about..
Added by Jimmy Hamilton on 13 September 2011
A wee correction John, Bella Thomson lived at Moaness no East Moaness I mind her fine. And yes Crockness did have some lightning strikes, especially around Boathouse and the Point o' the Ruff area, was it no a brother o' Vic Baikie that got killed wi lightning.
Added by Jimmy Hamilton on 16 September 2011
Talking about wells, can I put my oar in, or should I say bucket? There was one below Garson (my granddad Flett's croft) just above high water mark and one nearer to the Slap (Little Bloomer), Aunty Anne and uncle Willie Sabiston's.This one was up in a field between the two crofts. When we were boys we would carry the water in two white pails to be used for drinking, cooking,etc. Water for washing and laundry was usually gathered from the roof. Both of the wells were lined with slate type slabs and always had a few water beetle in them! Dad always said that they kept the water clean. (Wonder where they went for a pee?). When old people die they they take secrets with them. I am so pleased that I listened to my father and watched every thing he did and how he did it. He showed me how to strike a spring and also how you could ruin one.
Added by Stuarts Dad. Rodney Flett on 17 September 2011
Steering back from wells to boats, the owner of the boat in 1906 was probably a William Matheson who is listed in the 1911 census as aged 56, married, ferryman, own account (ie not employed by someone else, born Walls and living at Little Lythes. Just wondering if that name stirs any recollections?
Added by Jane Harris on 21 February 2012
<< back