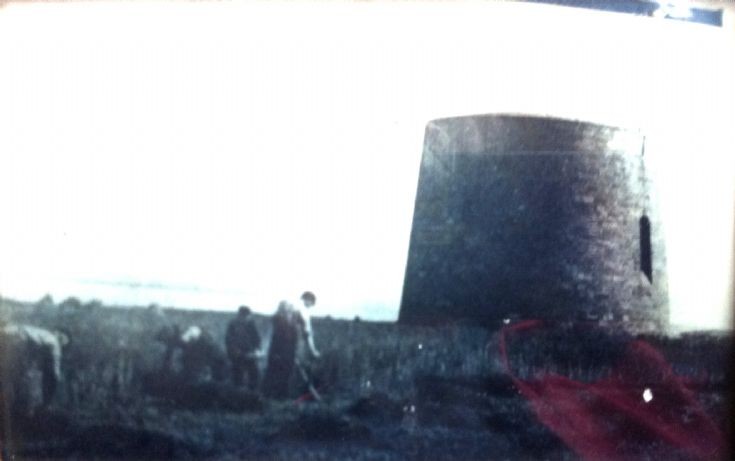 Martello Tower at Hackness Battery taken around 1906. Photo kindly provided by Johnnie Cload who still lives at the battery. People in the photo are left to right. William Taylor (my Grt Grandfather), his wife Eleanor Taylor (nee Gunn), Danny Fiddler, and Tommy Taylor (Williams son). William Taylor led a group of fishermen who crewed a yole, the "Jack (jock?) Reel" to rescue the crew of SS Dinnington which went ashore at Switha. Danny Fiddler was also part of the the crew. They were awarded the Kings Silver medal for what is described as one of the bravest rescues ever undertaken.

(I'd like to be able to link this picture to other pictures contributed of the Martello Tower, and pictures of the Dinnington, The crew of the Jock Reel etc, but not sure how to. Guidance would be apreciated)

View Large Version
Picture added on 06 June 2011 at 12:42
Related Sites: Longhope Sailing Club
Comments:
Copy the URL that comes up in your task bar of the page you want to connect, then paste it into the page you are writing comments where it applies. Steven the webmaster kindly makes it into a hyperlink as I just know basic code.

[To link to other pictures on here just type picture #
Nice to see this one Stuart, not one I've seen before. Danny Fiddler was my Grand Uncle. I learned from a relative in Canada last year that Danny was washed overboard from the ship he was on during a terrible storm and lost. May have been on the Great Lakes but not sure. If anyone has information I would be delighted to hear from them. I have a PC from him which shows a ship on it, probably the one he was lost off.
Added by Neil Johnstone on 08 June 2011
During the building of the oil tanks at Lyness before the war, a Taylor man (I think a son of the Wm Taylor in your photo Stuart) was killed when a tank plate fell on him, the plates were a ton he was working alongside men from Brims, three of them lifted the plate enough to get him out but he was already dead.
The names of these men I but cant recall but Capt Fred will know who they were.
It is said that in such tragedies people get super strength.
I wonder if the man was called Benny Taylor?? his sister was Nettie Taylor married Sam Taylor fae the "Auld Ha".
Added by John Budge on 16 June 2011
Thinking more aboot the death of the Taylor man at Lyness I think Fred Johnstone snr was one of the Brims men who lifted the steel plate off Mr Taylor.
Added by John Budge on 16 June 2011
<< back