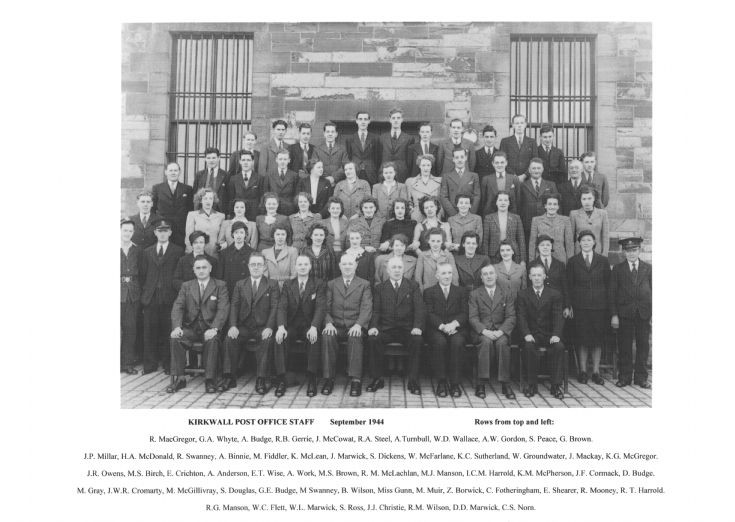 My Dad (top row) had this photo, but elder sister Dora (third row right)added all the names from the back of her's. It was taken after church on Sunday 17th September 1944, the day Allied airborne landings started in Holland. We know WL and DD Marwick, think S Peace became Dr Sidney Peace. Postmaster was John Christie. Dora was only the second woman to join Kirkwall PO in September 1939, but by 1944 almost half the staff (27 of 59) was female - compare with Dad's 1960 staff photo. Dora says many of the women were not local, had travelled north to be near their husbands/sweethearts stationed here.

View Large Version
Picture added on 15 May 2011 at 18:10
Related Sites: Kirkwall East Church
Comments:
I believe John Christie was my grandfather, who was postmaster in Kirkwall for a number of years -my father Robert Christie (who died in 1962)
spent his teenage years there. I have very few photos of my grandparents, so it is good to see a photo of him from this timel.
Added by Suzanne Fernie (Christie) on 15 June 2011
<< back