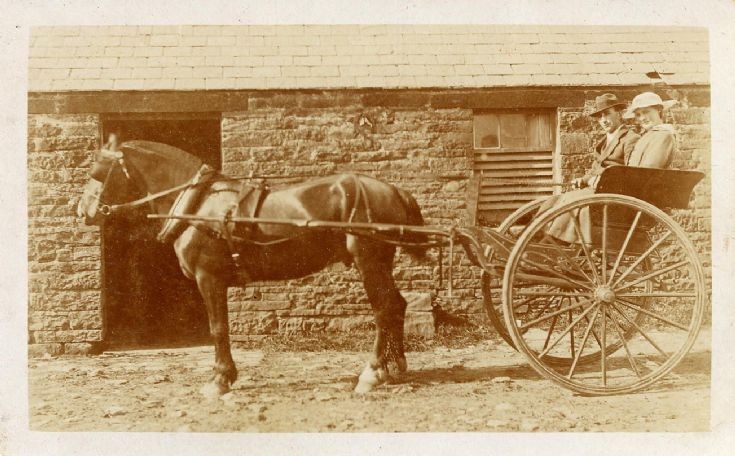 My maternal grandparents James Flett (1886-1952) and Georgetta Flett (1895-1976), possibly taken at Finstown where they lived at Edenmore, Maitland Place from their marriage in 1916 or sometime not long after until about 1931. I'm sure I saw a photo of another couple in a gig taken in the same place and with the same tint of print in the "new exhibits" display at Tankerness House over twenty years ago, but what the occasion was I don't know. An elderly relative said it was my grandmother who usually drove the gig, and pretty fast too. Her sister Annabella Ritchie refused ever to get in it with her again after a particularly hair-raising trip to Kirkwall to collect a cockerel from the North Boat. At the corner at Davie's Brig they nearly ran head-first into the County steamroller. Then on reaching Kirkwall they set off down the pier at such a clip that Annabella thought they'd never stop at the end. Sometime after this my grandmother apparently progressed to a motorbike and side car. Date estimated: 1920.

View Large Version
Picture added on 26 April 2011 at 20:07
Comments:
Nice pic, and great 'back-story'! Pity about the rather dilapidated backdrop, but I promise not to muck about with this one.

[I was actually quite admiring the stonework of the backdrop, and wondering if the building was still there- Steven]
Added by Ian Hourston on 26 April 2011
Stonework nice; window and missing slate not so nice.

[Are you doing a bit of moonlighting for VisitScotland Ian? - Steven :-)]
Added by Ian Hourston on 27 April 2011
No moonlighting, but a bit of promise-breaking. I love this picture, with the stylish couple and perfect turnout, but I got fed up looking at the rags stuffed in that hole in the wall. So I did have a go at it. But I won't post the result unless someone asks for it.
Added by Ian Hourston on 28 April 2011
Do you know if this carriage is still on Orkney?
Added by Alan Miller on 05 May 2011
Further to my comment of 27 April, I printed-off a couple of my tweaked images - one a rather fetching (or so I think!) colour-tinted version - and now wonder what to do with them. (No rude suggestions please.) I'm in the phonebook if Paul Sutherland would care to have them, though in a week's time I'll be off on holiday for several days.
Added by Ian Hourston on 14 May 2011
<< back