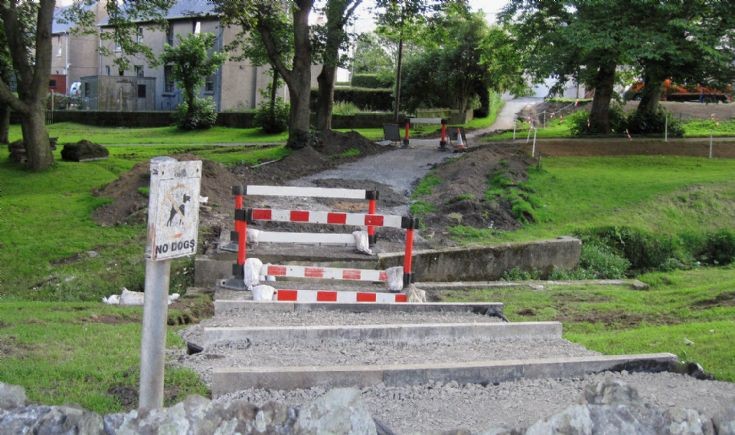 Work ongoing at the Willows

View Large Version
Picture added on 30 July 2010 at 12:55
Related Sites: Kirkwall East Church
Comments:
Are these steps that are going in here?
Added by Johnny johnston on 30 July 2010
Yep! Those and the turnstile will be great for wheelchair access???? I was told that I can go in my chair down the long path to the wooded area next to Papdale Mill when the pathway is finished but cannot get out at the bottom so will have to come all the way back. Bit of a waste of time making the pathway to just see the trees?
Added by MARION MCLEOD on 30 July 2010
Why - oh why is this being done?

[To improve access, upgrade paths that are a quagmire in the winter, and thus make more use of the Willows. It's not finished yet. It looks like a building site, because it is currently a building site - Steven]
Added by Barbara Jolly Watt on 01 August 2010
Well said Steven.
Added by Colin McBeath on 03 August 2010
steven as a councillor you obviously support what has/is being done which you are entitled to. I personally dont think what is being done is necessary, if any improvement was needed it could have been done in a different way without whole sale destruction.
But i think the real issue that make folk mad is the fact that oic have done this without any consultation or report. What council committee approved the project?. I would think its a case o whoopee free government money, what can we spend it on and some loonie officer in oic thought that the willows could do wae a tart up, its not that many years ago that the paths thro the willows were resurfaced. This scheme,the cycle tracks and footpaths round the peerie sea area may have improved things for cyclists and walkers, but judging by the low useage of them was it money well spent (free or not), the fact is that oic will have to fork out for salting them in winter and for mainteance in the future. At a time when the council were well aware of impending future budget cuts why did oic burden themselves with extra expense for the future.

[Reasonable questions asked, and a lengthy response will follow... - Steven]
Added by Kirkwallian on 03 August 2010
That is the way of woodland paths Steven. Not a place for concrete or tarmac
Added by Sandy Windwick on 04 August 2010
The Willows path upgrading was one of seventeen projects submitted for funding as a package through the Scottish Governments “Smarter Choices, Smarter Places” initiative in July 2008 following the recommendations of the Transport and Infrastructure Committee on 10 June 2008. The timescale for submission of the bid was, as always, very tight and the bid was developed by the Transportation department under the then Director of Development with extensive support from the Roads team.

As stated, the bid consisted of seventeen schemes, none of which could obviously be consulted on within the time available prior to bidding for funding, but all of which had been identified previously through either the approved Local Transport Strategy, the Community Planning process, the Active Travel and Bus User Forums, an Active Travel Audit, and from the Physical Activity and Sport Strategy, together with the work of NHS Orkney (and the associated consultations). For instance Action AT1 of the Local Transport Strategy 2007-2010, approved by Council in March 2007, is to “improve, extend and maintain the walking and cycling network and facilities” and the HITRANS Regional Transport Strategy contained an action to undertake Active Travel Audits.

In the case of path upgrading, this is not something that would normally require consultation anyway.

The grant was announced on 13 August 2008 and awarded in November 2008. A degree of match funding was required overall however the upgrading of the Willows Path is entirely funded through the “Smarter Choices, Smarter Places initiative.

The bridges are to be replaced with new wooden bridges which will have handrails, and be DDA compliant. The initial project showed the turnstile at the Willows being replaced because it obstructed access for the disabled- however it was retained by agreement with Elected Members, having received representations from constituents and the general public. Details of design were agreed in conjunction with the Member-Officer Working Group on which a number of councillors sit, and to which the Kirkwall councillors who were not members of this group were invited.

Personally, while I am fond of the turnstile I would happily have seen it go if it meant better disabled access. However the gradient, as emphasised by the new steps, would not lend itself to wheelchair access even if the steps were not there. The path that runs through rather than straight across has gentler gradients to enable access.

Overall the upgrading of the Willows paths is part of a wider aspiration shown in the Kirkwall Masterplan, which has been open for extensive consulation, to have an attractive green corridor from Papdale East through the schools campus.

The Peedie Sea paths and the Quoybanks traffic management indeed were other projects in the overall package. The intent fundamentally is to make the roads safer for everybody, and to encourage healthier methods of travel- I am sure we all agree these are laudable aims. However they will not be achieved without trying something, or doing something. Whether the 17 projects being enacted are the absolute best is of course a matter of opinion, and to pick on the Quoybanks one, yes it might be flawed but that has been revealed by at least trying it, and it has slowed down traffic, something that many residents were asking for.

With regard to winter maintenance costs of the Peedie Sea paths, I do not think that they will be on the radar for having anything done to them, given the way that roads and paths are prioritised.

So on the basis of the foregoing, I do support what is being done, and do not think it is any way wholesale destruction. I don't see how it will stop any existing activity there, and believe it will make the Willows more accessible to others.

Added by Steven Heddle on 05 August 2010
I do not have an issue with the upgrading of the old paths in the Willows. I agree that it is good to have disabled access also. I even like the idea of going back to the wooden bridges. I like the lower gate it is much safer. What has upset me is the new path and more grass being laid to tarmac. The beautiful old bank above the top bridge has been destroyed.
Added by M. Gibson on 05 August 2010
where did you find such rubbish to utter George Orwells 1984 by any chance.and by the way next time your up here take a tape measure up with you and measure the distance from the broken lines on the road to the edge of this path which has appeared from nowhere that my friend was the embankment that the late Erenest Marwick fought to keep but his opion then was as much worth as ours is now roll on voting day.
Added by WILLIAM GEORGE CARDNO on 05 August 2010
Thanks for that Mr Cardno.

Kirkwallian asked me what my opinion was, whether the paths had gone before the council, and what the cost of winter maintenance might be, and I took time to check the facts and answer him in this public forum truthfully, and fairly comprehensively.

Now I'm sorry that you don't think I'm entitled to an opinion, but I respect your right to have one. Vote for whoever you want.
Added by Steven Heddle on 05 August 2010
I only pat a peedie comment. I didnas want tae start World War 3

[I promise not to say any more! - Steven]
Added by Sandy Windwick on 05 August 2010
Sorry Sandy but it is a case of "take no prisoners"
Added by WILLIAM GEORGE CARDNO on 05 August 2010
You must remember Steven that, nobody but nobody has an opinion apart from Cardno.
Added by Colin McBeath on 06 August 2010
Thanks Steven. Saves a lot of time for the rest of us to try and explain what it is all about. On hindsight maybe we should have restored it to the 1950's style as we older people remember it!!!!!

Thought the photo looked like a dog training track with all the little jumps,etc, but I see dogs are banned.
Added by Bobby Leslie on 07 August 2010
Chist windering why they are gaan on aboot improving Disabled Access - but they pit big stairs in instead of upgrading the sloping path. Seems a bit droll. Mr McBeath needs to remark kindly and not chist for the sake of pure mean spiritedness. "If you can't say anything nice......."

[The turnstile is at the top of these steps- Steven]
Added by SGH on 28 August 2010
The barrier from the school gate seems to have jumped across the road because of the dangerous drop at the top of the burn. Do the bairns not need to be safe as they come out of the gate.

[I believe that the barrier around the corner will be reinstated soon- Steven]
Added by M. Gibson on 30 August 2010
i think its a good thing that its getting done up as the place was being neglected...
Anonymous comment added on 14 September 2010
Are there going to be safety barriers along each side of the burn [which gets rather a lot of water in it at times] to stop children, folk in general and wheelchair users from falling in? Maybe warning signs might be needed? I certainly will not be taking my chair anywhere along there - wet leaves on paths make then slippy and a burn right beside the path is not the safest place to take a walk or a wheelchair.
Added by MARION MCLEOD on 16 September 2010
<< back