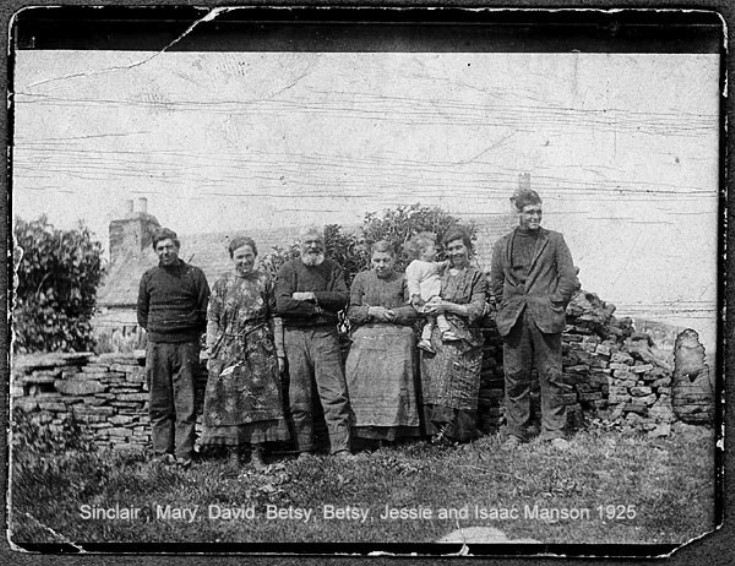 Whilst researching the Davidson family of Hoy, I discovered that the name Stewart(which is also my middle name)and a name I had always considered to be used only as a boys name, had been used for a girl. My GtGtGt Grandfather James Davidson married a Stewart Willison, (both died at Slack, Brebister in 1861/1868) had named their first daughter Stewart(F) in 1808.
Has as anyone else come across the use of the name Stewart for a girl?

This is one of my favourite photographs, but I do wish I had taken more photos of the main house when I stayed at the Stoop in 1971.
Picture added on 14 January 2010 at 00:01
Related Sites: Longhope Sailing Club
Comments:
Stewart as a Christain name for a girl was not common but I have come across it several times when working in the Orkney Family History office.
Only yesterday while going through the Paterson Kirk records I came across two baptisms where the mother was Stewart. Sept 3 1838. John Walls son to Andrew Walls and Stewart Taylor ( Orphir ). Oct 1 1838 John Corsie son to Samuel Corsie and Stewart Gaudie (St. Andrews). Hope that's of interest to you. Ian Cameron
Added by Ian Cameron on 14 January 2010
James and Stewart also my GtGtGrandparents. Have not found Stewart as a girl's name elsewhere, and have wondered whether, in view of the times, politics were involved. Stewart was one of the proscribed names after the Risings!
Added by Hugh Mackenzie on 16 January 2010
Thanks Ian. I have been wanting to join the Orkney Family History Society for some time. On my 'things to do' list for this week I think. Thanks again.
Added by Mary McGilvray on 17 January 2010
Hi Mary, On the subject of boys names used for girls. Graham crops up now and again as a girls name in the census records so it's not a misprint as some people think. Ian.
Added by Ian Cameron on 19 January 2010
I found this poem amongst papers belonging to my late Gt Aunt Mary Manson from the Stoop. This is probably not the correct place/site to put it but can anyone tell me who wrote it. Please excuse any errors as the writing was very faint making it difficult to read.

Tis a far journey I have travelled o-er the earth
And tis many years have passed since I was home
But the lone beauty of the Island of my birth
Has followed me wherever I may roam.

So by Switha and by Flotta and by Fara I will go
To the music of the waters on the shore
When I see the silver moonlight on the waves of Scapa Flow
I'll never leave the Island any more.

So I'm coming home to Orkney and I'm singing on my way
To the cliffs where the Atlantic breakers roar
When I gaze upon the grandeur at the closing of the day
I'll never leave the Island any more.

There's a wee cottage on the shelter of the brae
By the fireside there is still a vacant chair
And my hearts tells me I have been too long away
From the loved ones who are waiting for me there.

So I'm coming home to Orkney and I'm singing on my way
As I hasten on to greet the friends of yore
When I'm sitting by the fireside in the house below the brae
I'll never leave the Island any more.
Added by Mary S McGilvray on 19 July 2010
I would suggest that this is a song, rather than a poem, to be sung to the tune of 'The Road to the Isles'. The original song referred to a journey back to the Hebrides, and here has been altered to refer to a return to Orkney.
Try singing it - it fits perfectly.
Added by Hazel Malpass on 20 July 2010
Has it been written to be sung to the tune of "The road to the Isles"?
Added by Morag Flett on 21 July 2010
think this would be sung to the tune of road to the isles..... can imagine Billy Budge singing this sort of stuff
Added by Jimmy Hamilton on 21 July 2010
Looks as if it may actually be song lyrics - try putting the words to the music of "The road to the isles", for example.
Added by BBJ on 21 July 2010
Thank you for your replies....and yes, the tune "The Road to the Isles" fits perfectly.
I'm just back from 12 wonderful days in Orkney, staying in Longhope and Finstown. It was great to be back again in Longhope again.
Winnie, I bought some bere meal flour in Birsay so I'll be trying my hand at Bere Bannocks again very soon. Enjoyed our afternoon baking session.

Added by Mary S McGilvray on 09 August 2010
I was there in 1972 and met Mary, Isaac, and Sinclair. I believe Sinclair might have had cancer,as he had a prominent growth on his lip. :I was there in late June or July and met all three of them. Saw the interior of the ground floor of the stoop. MY address is 1850 Western Parkway Vancouver B.C. V6T 1V4 CANADA. My relationship to them is grandniece. My grandfather was born at the stoop. His name was Malcolm Manson. I can be reached at marniefaunt@shaw.ca (my niece who is writing this.
Added by Marnie Manson Faunt on 30 August 2010
Hi Marnie, hope you received the photographs I e mailed to you. Have just finished uploading a couple of photos of Mary, Isaac & Sinclair taken in 1969 when I stayed with them at the Stoop. Hopefully you should be able to view them soon.
Added by Mary S McGilvray on 23 September 2010
<< back