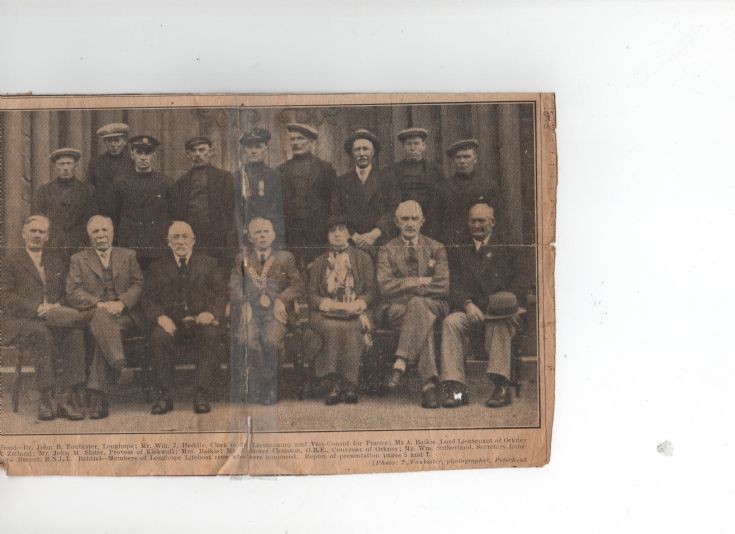 This is the crew of the Longhope lifeboat " Thomas McCunn" who rescued 41 men from the French Grand Banks trawler "Neptunia",which was wrecked on the tail of Brims on 21st. Feb. 1936. They were in Kirkwall receiving awards for this service. Coxwain Billy Dass was awarded the R.N.L.I. bronze medal and a silver medal from the French government and the remainder of the crew were awarded bronze medals from the French Government. Also in the picture is the former coxwain Jake Swanson, who was awarded the R.N.L.I. long service vellum. Jake joined the crew when he was 14 years old and was coxwain for 34 years, 28 of those years under sail.
Back row. George Johnston( Bowman), Bob(Sodger)Johnston(crew),Bob(engineer)Johnston(mechanic), Jocky Robertson(crew), Billy Dass(coxwain), John Norquay(crew), Jake Swanson(retired coxwain), Eric Mowat(assistant mechanic), Sinclair Mowat(2nd. coxwain).

This picture was taken in October 1936.

can you email me...just looking to try and connect our Johnston family together and wondering if you could help with some names and dates....

rands@grey-bruce.net
Added by Richard Johnston on 13 March 2010
<< back