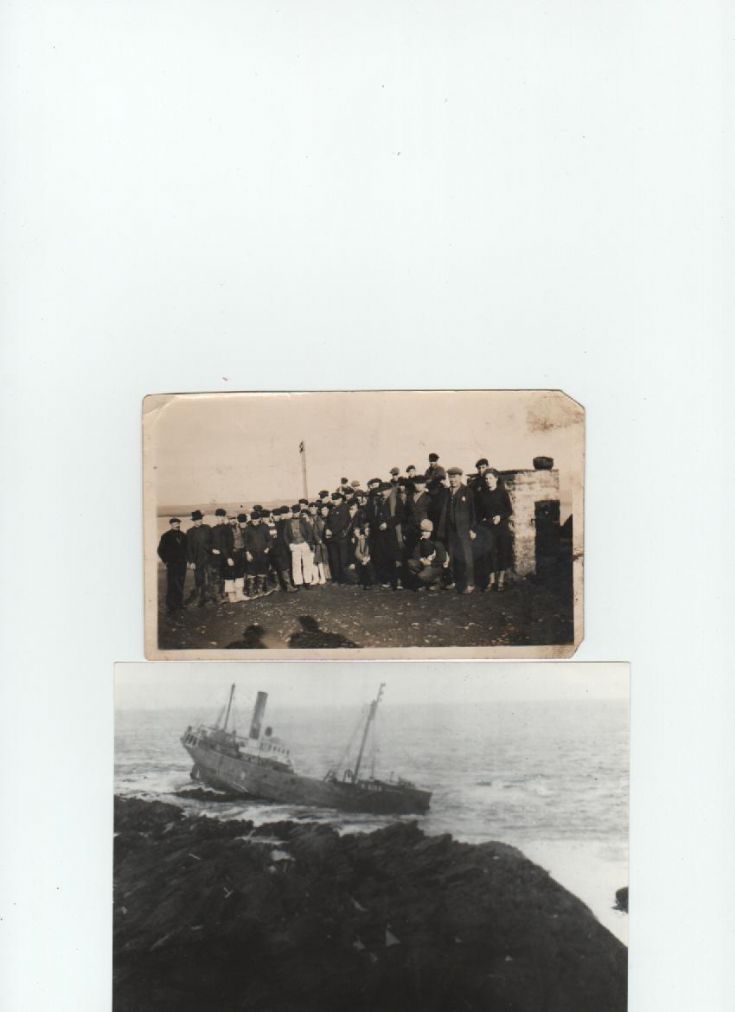 The Neptunia was a factory trawler of her day, being able to cure and pack her catch at sea. She was from the port of Havre, France.
The Neptunia went ashore on the Kittack rock at Brims Ness in thick fog. She had a crew of 41, all landed by Longhope Lifeboat. They are in the above photo along with Miss Groundwater of the Longhope hotel and Mr John Doull who was the shipwrecked mariners socy rep for Hoy at that time.

The trawler was a total loss. There was a pig on board and a cat, both found there way to land. Descendents of the cat were still in Brims for along time afterwards, and someone took the pig home but the athorities got to know of this and the pig was put down, I suppose for fear of foot and mouth disease or swine fever .

The Lifeboat coxwain Billy Dass was awarded a medel for the rescue.

Shellfish caught at the Kittack can still be found stained with rust from the wreckage on the bottom.

View Large Version
Picture added on 23 January 2008
Comments:
Does that mean the belief that a pig can't swim without cutting its throat with its trotters is not true? Or did this pig receive a helping hand?
Added by Paul Sutherland on 25 January 2008
The internet is a marvellous thing. After posing the above question I discovered a webpage (www.luciesfarm.com/artman/publish/article_107.php) which gives so many examples of swimming pigs over the years as to put paid to the throat-cutting theory for good. It also has a couple of pictures of a very happy-looking Tamworth Red in a swimming pool!
Added by Paul Sutherland on 25 January 2008
The pig and the cat swam ashore unaided, but the dog who was also on board and was supposed to be a strong swimmer, was never seen again. Apparently, the pig and cat abandoned ship from the East side, where the tide was not too strong, but the dog chose the other side, where it was ramping west.
The cat lived for many years at the Haven with the Mowat family. As for the pig, there are many stories of the hard men of the Island going down to capture it with nets etc.but hastening back at a rate of knots minus their equipment.
The "Neptunia" was a Grand Banks trawler and as such they fished from two man dories with handlines, similar to the Portuguese, who fished from one man dories. That was the reason for such a large crew.
Added by Fred Johnston. on 29 December 2009
<< back