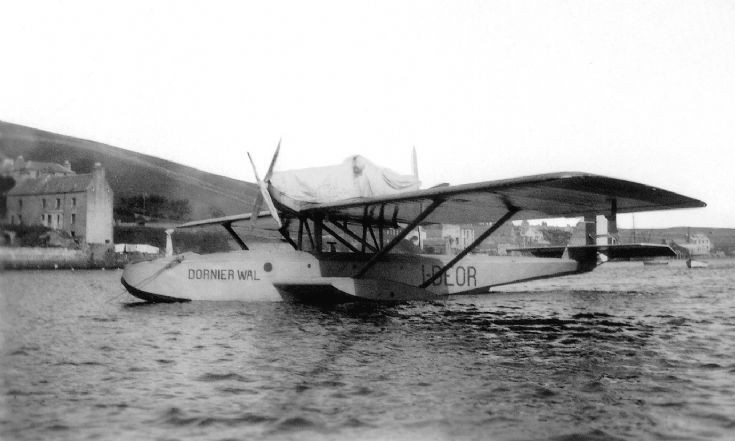 Dornier Wal (Whale) flying-boat moored Stromness August 1924. Unknown photographer.
The in-line push-pull engines are under a tarpaulin.
The aircraft was engaged in a pioneering attempt to establish a commercial air-route across the N Atlantic using various ports of call, of which Stromness, through the efforts of F C Thornley of Thornley-Binders seaweed firm, was one.
On 21 Aug 24 the aircraft ran out of fuel and ditched 125 miles east of C Farewell, Greenland. After 4 days the aircrew, Italian Air Force Lts Antonio Locatelli and Tullio Crosio, were rescued by USS Richmond, a support ship for the first global circumnavigation by air, which had been completed a couple of weeks earlier. (Locatelli, a noted aviator of the day, was killed in action in Italy's Abyssinian war 27 June 1936.)
Wals were highly esteemed and helped put Dornier on the map as a planemaker. Because of the embargo on German armaments manufacture, Wals were mainly built in Italy. I-DEOR was built in Pisa.
My thanks to the internet and to The Orcadian Book of the 20th Century.