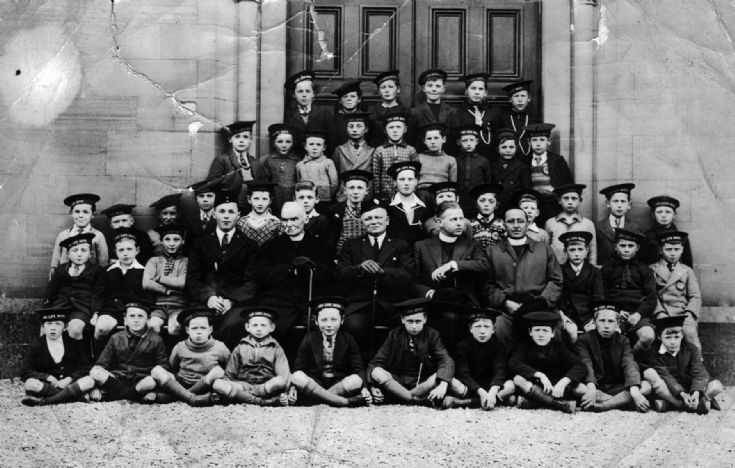 Found this picture amongst many Orkney photos , is it taken in Orkney?

View Large Version
Picture added on 20 January 2007
Related Sites: Kirkwall East Church
Comments:
Looks like the door of the old East kirk (now OIC reception)
Added by Whassigo on 21 January 2007
The Officer seated in the centre is Mr Burges and is that Jackie Scott 5th from the right in the 3rd row from the back?
Added by Bruce Moar on 23 January 2007
My Dad is working on this picture and trying to remember names. He can remember some names but mainly just the faces but it is so long ago. He said the 3 Ministers were the Paterson, Cathedral and Peedie Kirk Ministers - he thought - but couldn't remember the names. Will post further info as and when he remembers. He also said he cannot see himself in this picture but maybe he had "absconded" that day but all his pals in the BBs are pictured.
Added by Marion McLeod on 24 January 2007
Third from the left on the second back row could be Davy Fox
Added by Bruce Moar on 24 January 2007
I kent I had seen this photo before.
I found a cutting from an old Orcadian which had been submitted by Andy Wylie from Willow Court. The photo was taken in 1932 outside the Paterson Church (now OIC).
Back row from the left: Dan Grieve, John Donaldson, Bertie Craigie, Davie Johnston, Harald Linklater, George(Doey)Craige.
Second back row: MacGillivary, Dave Logie, Davy Fox, James Drever, ?, Tusker Ross, Ian Linklater, ?, Norman Peace.
Middle Row: David Paterson, Andy Wylie, Tona Linklater, Bill Merriman, Charlie Findlater, Eric Mackay, Gordon Linklater, Leonard Leslie, ?, Jackie Scott, ?, D. Flett, Ian White, ?.
Second front row: Billy Norquoy, Denis Muir, Jim Stephen, Alfie Brodie, Rev.Gray, Captain Bill Burges, Rev.W. Barclay, Rev.MacCorkindale, D. Moncrieff, Vinnie Linklater, Hamish Drever.
Front row: ?, Bob Windwick, Jim Sinclair, Freddie Findlayson, Mervyn Drever, Ronnie Harcus, Johnny Craigie, Ginger Thomson, John Ritchie, Harald Tait.

It's worth noting that at least seven of these boys went on to win either a boys or mens ba or even both.

Added by Bruce Moar on 24 January 2007
Rev Charles A Gray was minister of the Paterson Kirk from 1925 to 1935 and Rev William Barclay minister of the Cathedral from 1919 to 1936. Rev J McCorkindale was the Congregational minister but I don't know his dates. Did he go away and come back? - I've seen reference to him in the fifties, but Peace's Almanac in 1939 and 1940 mentions a Rev J W Morley.
Added by Paul Sutherland on 24 January 2007
Rev J McCorkindale was my grandfather and he went from kirkwall to Glasgow returning to Kirkwall Congregational kirk a few years later around 1942. I think he remained in Kirkwall until his death in 1954
Added by Jenny Wightman on 22 January 2008
There is an interesting obituary of the Rev. James R. McCorkindale and a photo of him in the pulpit in the "Orkney Herald" of 4th October 1955. He had died the previous week aged 62. He was born at Whiteinch near Glasgow and went to sea in sailing ships as a young man. In the First World War he served in the Argyll and Sutherland Highlanders, was wounded in France and afterwards served in Salonika. After the war he worked in America and then went back to sea before feeling called to the ministry. He trained as a Church of Scotland minister but there being no vacancies following the Union of the UF and Established Churches in 1929, he was accepted for the Congregationalists and came to Kirkwall that same year. In 1937 he moved to Parkhead Church Glasgow but the strenuous workload there in wartime affected his health, so he returned to Kirkwall in 1948. He was also Probation Officer for Orkney. The obituary mentions his tact and sympathy, his fine sense of spoken humour, and that he had inspired his congregation to build the church hall by voluntary labour. His funeral was so well attended that many mourners had to remain outside.
Added by Paul Sutherland on 19 December 2009
We used to be able to zoom in on this picture. Is it possible to get that again?

[The Zoomify feature got the heave because of inconsistent browser support. You'll find that Opera and IE now have magnification of pages built in, and also Windows has a magnifier at Accesories -> Ease of Access -> Magnifier (in Vista). - Steven]
Added by Bruce Moar on 10 October 2011
<< back