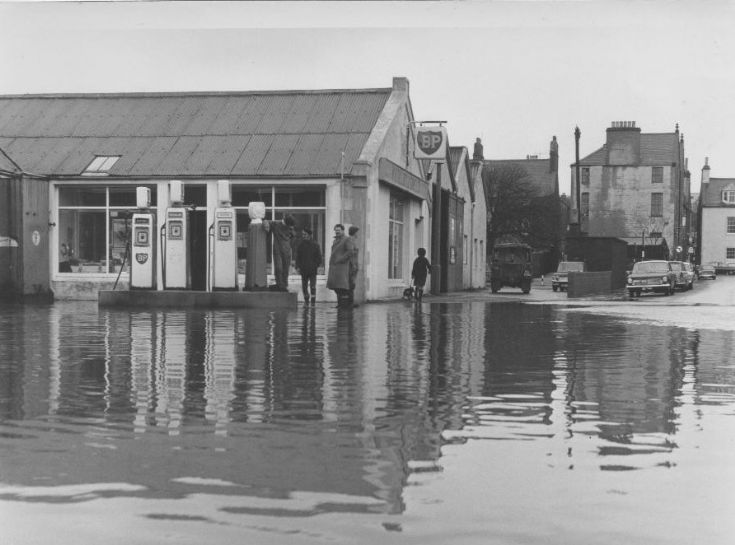 Following on from the recent floods of 26 October this year I thought your viewers may like to share previous examples of the levels to which the water used to rise BEFORE the council installed the "flood defences " in the
Peerie Sea.

These photos were taken by Harry Russell, the first shows Alex Vesco (customs officer) and a gentleman (id unknown) waiting for a boat at Tullock's petrol pumps on the corner of Castle Street and Junction Road.

The second shows how W R Tullock's garage looked before the fire (Sept 1980) In the photo are from l to r David Tullock, Jim Park, Bryan Taylor, unknown man with flat cap (possibly Gerald Moodie of C T Stewart Bakers)
Lady with dog (also unknown). The vehicles shown are a Landrover BS7094 (belonging to W R Tullock) a Hillman Imp BS7774 (belonging to myself) and a Vauxhall Cresta BS7461 (may have belonged to Murdo Nicolson also of C T Stewarts ).

As a point of interest, the Islands poulation today is much the same as it was in the late '60s- however today the daily newspapers are collected in a Transit sized vehicle carrying up to 1.5 tonnes whereas in 1968 the short
wheel based Landrover featured in the photo used to collect (with room to spare ) all of the daily and Sunday papers in one go.