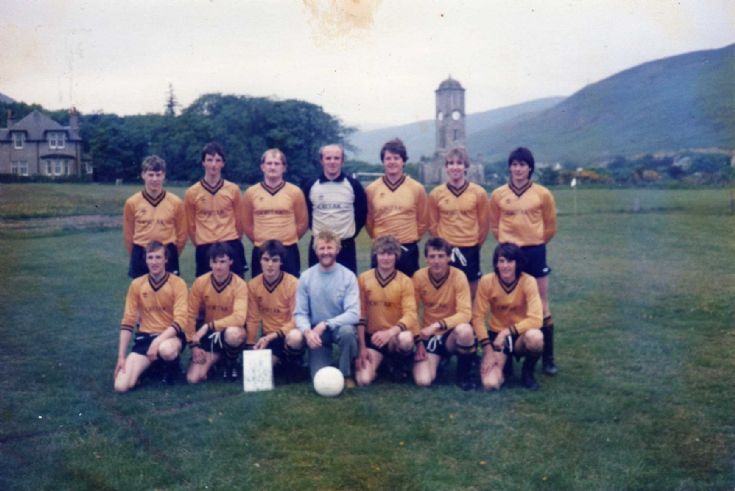 This was the Rovers A team from 1985. The photo was taken before the Highland Amateur Cup match away against Golspie Stafford (played in Helmsdale, for some reason). After drawing 2-2, we lost the replay at the Bignold 2-1, with Rodney Spence grabbing a 'snappy brace', sadly one at each end.

View Large Version
Picture added on 16 June 2009
Comments:
Cleenan oot yer draarrs again Liam?!! Cant remember much about that game myself but I'm sure Bruce would. Doesn't surprise me Rodney scored both ends and I bet they were belters!! Great trips!
Added by Billy Johnstone on 22 June 2009
I don't actually mind a hell of alot about the game.
I mind it was my first away trip with the Rovers senior team and it was quite a trip!!
On the way home I mind Finno frisbeeing Ralphs hat off the Soutar's Lass into the Pentland Firth.
Not happy with that he then ripped off my jacket which I had borrowed off my Dad for the day!!

What I mind about the replay the following week was that there was quite a big crowd in the Bignold and I remember the ref getting a hard time from some of the more seasoned supporters including local footballing legends like John Donaldson and Bill Sim. They were telling him that he was rubbish (or words to that effect!!) and that he should pack it in. Nearly twenty-five year on and he's still reffing and I've long since packed it in!!