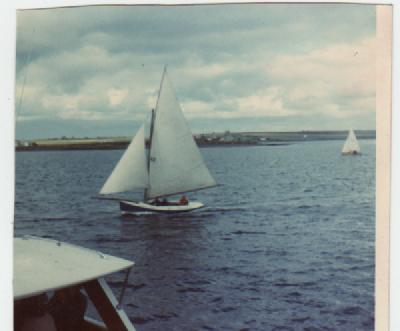 This photo was taken at Longhope regata around 1970-73.
I believe Lavern was built by a Mr Baikie in Stromness and was to be the fastest boat at that time. She did, and does,sail well especialy with a good wind.
I hope my facts are correct! The boat in the foreground is I think a boat mentioned earlier owned by a Mr Harris and called Fia-Fia.
The Lavern is now owned by Andy Dunnet whose father Walter Dunnet owned her in the 1950s until around the time of this photograph. She can be seen at the south end Stromness.
When would this boat have been built??

View Large Version
Picture added on 26 February 2009
Related Sites: Longhope Sailing Club
Comments:
A fine boat indeed, sailed bonny.. think it wis spelt Laverne, but you might be right tho'. Is she still sailing...?
Added by Jimmy Hamilton on 26 February 2009
Spoke with Andy and Harvey this morning. The Laverne was built in 1936. They still sail around Stromness harbour in the summer months.
Added by CALLUM MACIVER on 28 February 2009
Did Jackie Groat not own it at some time as well? I thought it was the Laverne that Arnold took us out in for a sail round about 1961/62.
Added by Beryl Simpson on 04 March 2009
Yes Beryl, Jackie had the Laverne for several years, I remember painting the insides white when she was stored in the shed with the old grocery van.
Added by Stewart Taylor on 07 March 2009
Hi all, Jackie Groat was married to my Grandmothers sister Edna Yule. My sister is actually called after Jackie's boat...Laverne. I came across this site through google...the wonders of technology. Thanks for posting this...nice to see a picture of it.
Added by Beverley Gilmour on 29 October 2012
I remember my dad saying when Edna was young and healthy Jackie and Edna were really good dancers. She was really poorly with MS for many years.
Added by Beryl Simpson on 04 November 2012
wonder where the name Laverne came from. Baikie, the builder's daughter was called Laverne. She would have been born about 1944 and was married to Stuart Mowat
Added by W Watters on 12 November 2012
<< back