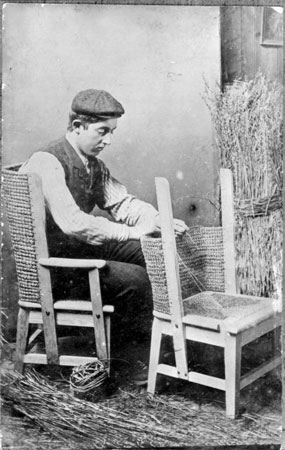 I was given the picture and some notes below, if they are incorrect I am sure someone will let me know

Straw backed chairs were unique to the Orkney Isles and today are popular not just on the islands, but are exported across the world. Early versions of the Orkney chair consisted of a simple low round stool covered with straw, developing later into a low chair with a two foot straw back. By the start of the 20th century, the chair was square shaped with no straw covering at the chair base. Sometimes a hood and a drawer were added to the chair.

Willie, a joiner and undertaker, was the son of David Kirkness and Isabella Drever. Willie lived originally at Ness, Papa Westray, Orkney and later in Edinburgh. He died about 1975.