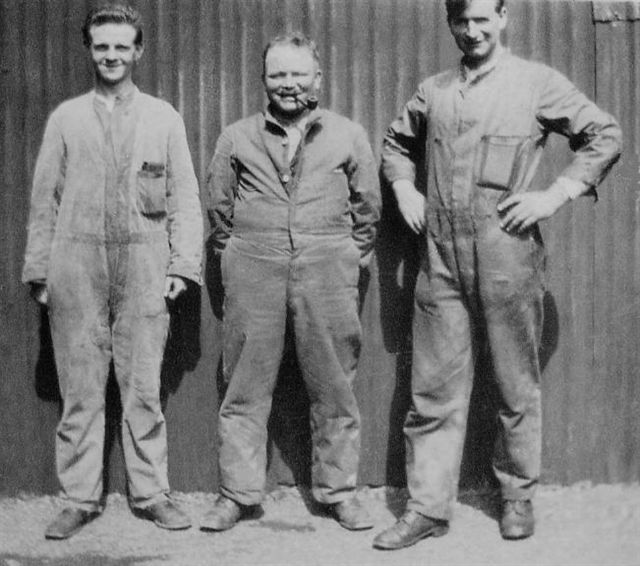 'With reference to the picture by T.K. on your website, No 105-Kirkwall Electric Power Station (courtesy of Orkney Archives), I hope this and the following picture will be of some interest.
Of the three men only one was known to me, William Burges , in the middle of the group was my grandfather.
If memory serves me correctly, This power station saw service originally as a power station at Houton,Orphir during the first world war. It was dismantled and brought to the Kirkwall site after hostilities ceased.
I doubt if anyone in Orkney will know who the other two gentlemen were, but it would be interesting to know if anyone does.
As far as I know "Bill" as he was better known was with the K.E.P.S. from it's start-up in Kirkwall.
I look forward to any comments on this subject'

The date is an estimate.
Picture added on 24 May 2004
Comments:
I have now good reason to believe that the gentleman on the left of this picture is none other than the late Mr Ronald Slater, who in later years had a business in Bridge Street as a wine and spirits merchant.
In addition he had a great interest in early Radio in Orkney as well as being a very keen photographer. It is just possible that his camera actually took this photo.
Added by Peter Burges on 20 October 2006
<< back