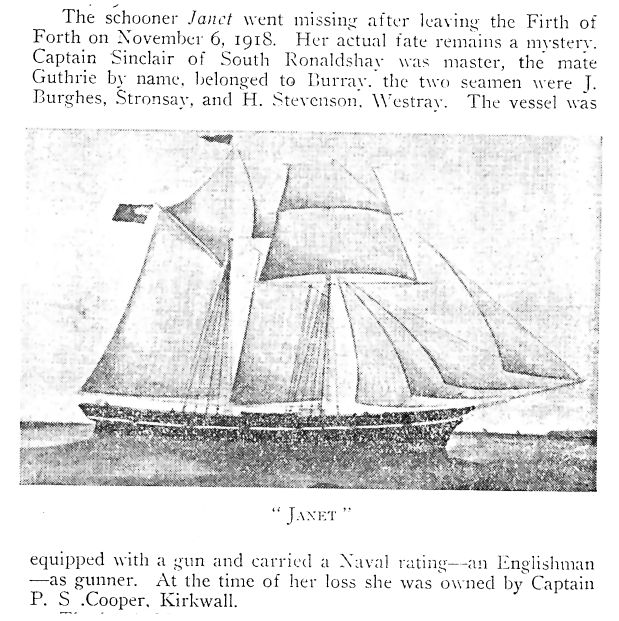 The Mystery of the Schooner Janet

I am hoping someone has any more information about the men on the men who were lost.

Alexander H Sinclair was one of my ancestors.

View Large Version
Picture added on 05 August 2008
Comments:
The Stronsay man was James William Burghes, born 3rd April, 1901, at Stackaback, Papa Stronsay, to James Reid Burghes and Barbara Goar Chalmers. James Junior was a brother of the late Andrew Burghes of the Smiddy, Stronsay. The Stronsay story was that the Janet was sunk by mistake by the Royal Navy South East of Auskerry but that might be a bit confused with the Express sinking. Although I have never heard before of the Janet being owned by Captain P.S. Cooper, it would appear that this was Peter Shearer Cooper, son of William Cooper and Mary Ann Peace of Stronsay. With his father, he ran a shipping company called William Cooper and Son, and they plied their trade between Leith and Kirkwall. They had several ships including the Express, Barmore and Ruby. The Ruby struck a mine on 29th March, 1917, and sank with the loss of six of her crew. He then bought the Hebridean and changed her name to Express 2. She was sunk on 9th February, 1918, after a collision with HMS Granville in the Pentland Firth, and all the crew were lost. The Captain was Robert Heddle, married to my Grand-Aunt Margaret Smith. Cooper then purchased the Clansman and used that until 1920 when he bought the "Amelia" and operated in Orkney waters until 1950 when he sold out to the "North Company" He died on 5th April, 1952, and his ashes were taken from Aberdeen on the Amelia, and scattered in Kirkwall Bay. That's whit am been telt innywey. Innybody ken diffrent ?
Added by Bill Miller on 28 December 2008
Peedie Jim as he was known was my uncle. His younger brother born after he was killed was nicknamed Big Jim. My mother was AGGIE BURGHES/Stout.
Added by Erlend Stout on 12 January 2009
I think the Englishman on this boat was my Grandmother's first husband Frederick Boorman age 36. He was a Leading Seaman RNR whose date of death is 6/11/1918 whilst on war service on the Ketch Janet. Having traced ths boats number 89021 at the National Maritime Museum I found it to be a schooner and then made this connection. His name is on the Navel War Memorial in Chatham and he was born and lived in Faversham Kent. He left a wife and 3 month old daughter.
Added by Mark Talbot on 06 December 2012
My grandfather was James Burghes. I think Aunty Ag’s child Erlend refers to Jim as Big Jim. He died when I was only 6 in 1976.
Added by Anya Burghes White on 04 March 2020
<< back