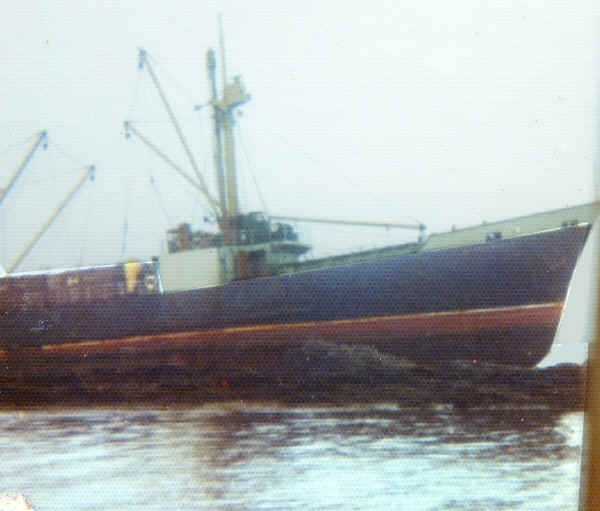 Second of Neal's pictures. He writes:

A couple of pictures of the North of Scotland Orkney & Shetland Shipping Company vessel St Rognvald high and dry on Thieves Holm. I believe they were taken circa 1973.

The St Rognvald was under the command of Capt Andy Moncreif when she grounded on her approach to Kirkwall, the crew were taken off by a Shapinsay fishing boat and Capt Moncrief was dismissed. A salvage tug was chartered to try pull the ship off, but she was too far ashore; her bow was literally on the grass. The salvage company detonated explosives under the hull as the tug pulled and the St Rognvald was free again and continued to give many more years service to Orkney and Shetland.

Captain Moncreif was in fact highly regarded for his seamanship and admired as a real gentleman by all who sailed under him including myself. He subsequently became master of the Kirkwall owned coaster Elwick Bay and several months later tragically drowned when he fell between the ship and the pier in St Margrets Hope.
Picture added on 04 May 2004
Related Sites: Kirkwall East Church
Comments:
The farm gates at Carness were padlocked by the Mainland Brothers to stop the sightseers getting through. Dave Mainland was there to let the Coastguards in.
I managed to slip in too and view the scenefrom the Carness side.
Added by WG Leonard on 06 May 2004
I remember that happening way back in the 70's, I was 18 at the time, and if my memory serves me correctly, it was the tug lloydsman that was despatched from south to get her off, I think it took a few days to get to orkney as it was I think, somewhere near the english channel on other important work.
Added by Stuart Delday on 25 January 2006
Regret to read the fate of Andy.
We were at school together in Lerwick. Think he was a year younger than me. Met him later when his ship was in drydock in South Shields.
So sad.
Added by Hubert Thompson on 07 August 2006
As the photo shows, her bow was not in the grass contrary to popular belief.
Added by Smithy on 21 September 2006
<< back