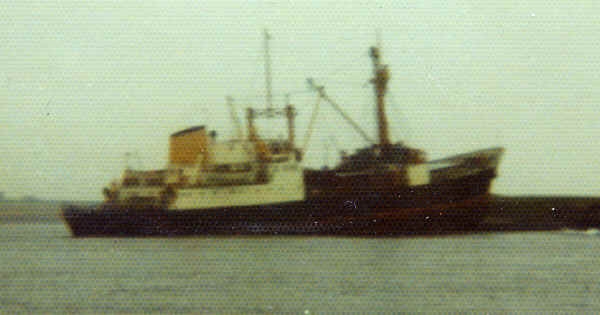 A couple of pictures of the North of Scotland Orkney & Shetland Shipping Company vessel St Rognvald high and dry on Thieves Holm. I believe they were taken circa 1973.

The St Rognvald was under the command of Capt Andy Moncreif when she grounded on her approach to Kirkwall, the crew were taken off by a Shapinsay fishing boat and Capt Moncrief was dismissed. A salvage tug was chartered to try pull the ship off, but she was too far ashore; her bow was literally on the grass. The salvage company detonated explosives under the hull as the tug pulled and the St Rognvald was free again and continued to give many more years service to Orkney and Shetland.

Captain Moncreif was in fact highly regarded for his seamanship and admired as a real gentleman by all who sailed under him including myself. He subsequently became master of the Kirkwall owned coaster Elwick Bay and several months later tragically drowned when he fell between the ship and the pier in St Margrets Hope.
Picture added on 04 May 2004
Related Sites: Kirkwall East Church
Comments:
Remember it well. We sat watching it all happening from our house at the top of Hatston hill.
Added by Marion McLeod on 04 May 2004
We passed this just after it went aground as we headed back to Shapinsay late in the evening on Alfie Nicolsons boat.
Added by Jim Muir on 12 February 2014
<< back