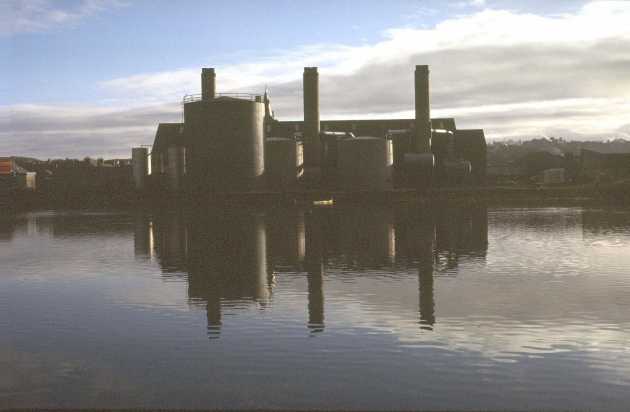 "Kirkwall Power Station. A contributor asked for a shot of the new power station. I took this silhuette on a Bronica ETRSi one evening after sunset from across the Peedie Sea. Probably summer 2000."

Despite being the 'new' power station it is more than 40 years old and now only on limited standby and silent as the islands' power is now supplied by cables under the Pentland Firth.

It used to be a hugely busy and and hugely noisy place that was alleged to be literally shaking the Cathedral to bits.

Shetland has a power station that looks identical to ours except that it seems to be a mirror image, and this is still in full use.

Any one remember when they tried to surcharge electricity users in the islands because of the cost of generation using oil?

My dad worked on the building of the 'new' power station and still laments losing his new trowel in a water tank at the time.
Picture added on 29 April 2004
Related Sites: Kirkwall East Church
<< back