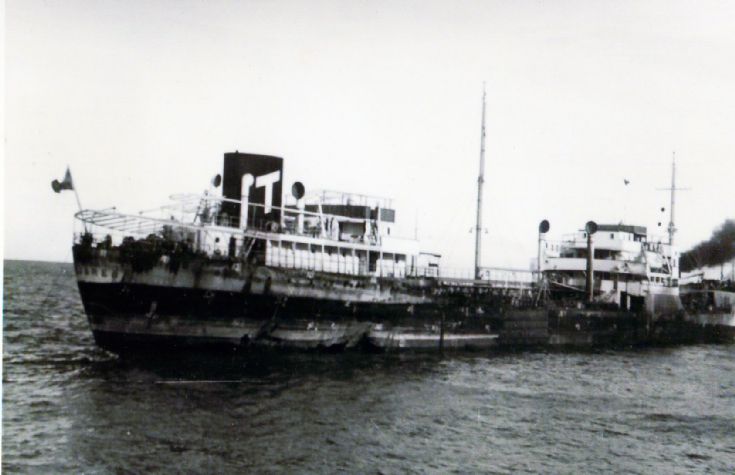 This pic was taken the day she was refloated. She was towed into Longhope Bay where she had temporary repairs to make her ready for the tow to the drydock. I seem to remember her being ballasted by the head and then by the stern till the prop was out of the water, but I was only a peedie boy at the time. The next bit would be considered a horror story in todays world. I dont know if it leaked or was it pumped out but the whole Crockness shoreline was covered with black fuel oil. Rocks, tang, sand was impregnated with the stuff, boats that were caught of guard on the beach were black . And of course so were all us kids were in a mess as well. Poor mother what she had to put up with. I remember that the stones on the beach were black for years after the incident.----------- Allan.

View Large Version
Picture added on 26 February 2008
Related Sites: Longhope Sailing Club
Comments:
I mind her stern near right out o the water as you say Allan, our Norwegian skiff was lying on the moorings full o water tae tighten her up and was full o oil . mind Jock gray boiling a partan and it was full o oil.. not a word aboot an environmental disaster, and no attempt to clean it up..... sort of Shit happens attitude in them days.
Added by Jimmy Hamilton on 28 April 2013
<< back