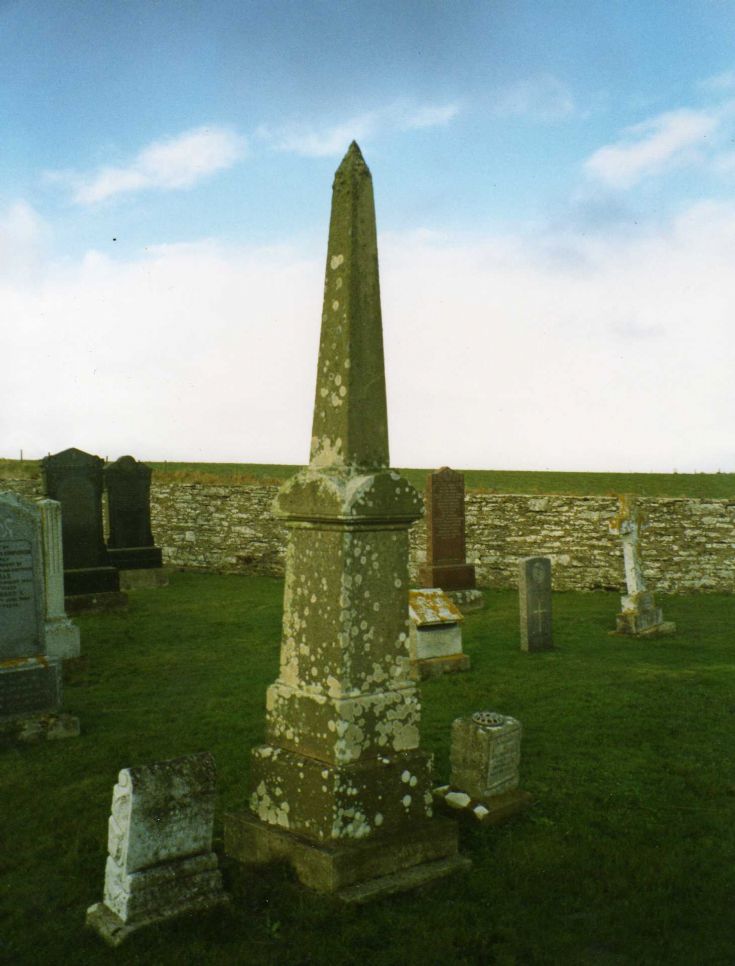 Memorial to the Leicestershire

This is a memorial in Ousna kirkyard to the fifteen men who lost ther lives when the Grimsby trawler Leicestershire, was wrecked on Berry head Hoy 28/01/38.
Some of the dead were returned to their families in Grimsby others are buried here in Ousna.

The trawler Leicestershire from Grimsby sank on 28th January 1938 somewhere near Torness, Hoy, Orkney, with the loss of all the crew. The skipper Alfred Samuel Evans was the eldest brother of my father, trawler skipper from Grimsby Thomas Baxter Evans.

Some bodies were reclaimed from the sea by your brave Orcadian forebears. The bodies that could be identified were returned to Grimsby on the trawler Hampshire and the other bodies were buried at Kirk Hope Cemetery, I believe.

I have just seen a report in a book, that less than two weeks after the sinking, a vessel was sighted at low water by Longhope lobster men and it turns out that this vessel was indeed the Leicestershire. Apparently she was discovered on a submerged rock known locally as “The Tift”. The report says the Leicestershire was 50 Yards from some steep cliffs.

Would it be possible to have the coordinates of this area please and any information and or pictures you can supply? Please contact me using the email address with this comment (click on my name).

I know the Orkney people paid for and erected a monument in the graveyard, somewhere near where the Longhope Lifeboatmen’s memorial stands proud and brave on South Walls. I was surfing the net and I think I can see the Leicestershire Monolith, in a photo showing the rear of the Long Hope Memorial looking down to the water and across to Cantick Head.

I have in the past when I was a fisherman sailed many times through the Pentland Firth and always felt wary of it and its swirling currents and eddies.

My younger brother worked on and off as a mechanical fitter for many contracts on Flotta at the Terminal.

Say hello to The Old Man Of Hoy for me. It always put a smile on my face when you could see it.

I have not fished since 1977 sadly in Grimsby trawlers.

Added by Gareth Evans on 16 February 2008
I am trying to trace where on Island of Hoy this memorial is situated. There are varying sites quoted on the net where it may be, but would appreciate any information as my mother has recently died and she was a daughter of one of the persons who perished when the Leicestershire sank in 1938 and it was her wish to have her ashes buried there.

[I think it is this one, but the Hoy folk can confirm: https://goo.gl/maps/HKZ53EBo6xq . The kirkyard is still in use- Steven]
Added by Gill Drummond on 12 April 2018
Hi
I'm wondering if anyone can help? I am the great granddaughter of Bert Holloway, 2nd Engineer from the SS Leicestershire. We are hoping to visit the memorial but can't find Ousna Kirkyard on any maps. Does anyone know where it is?
many thanks