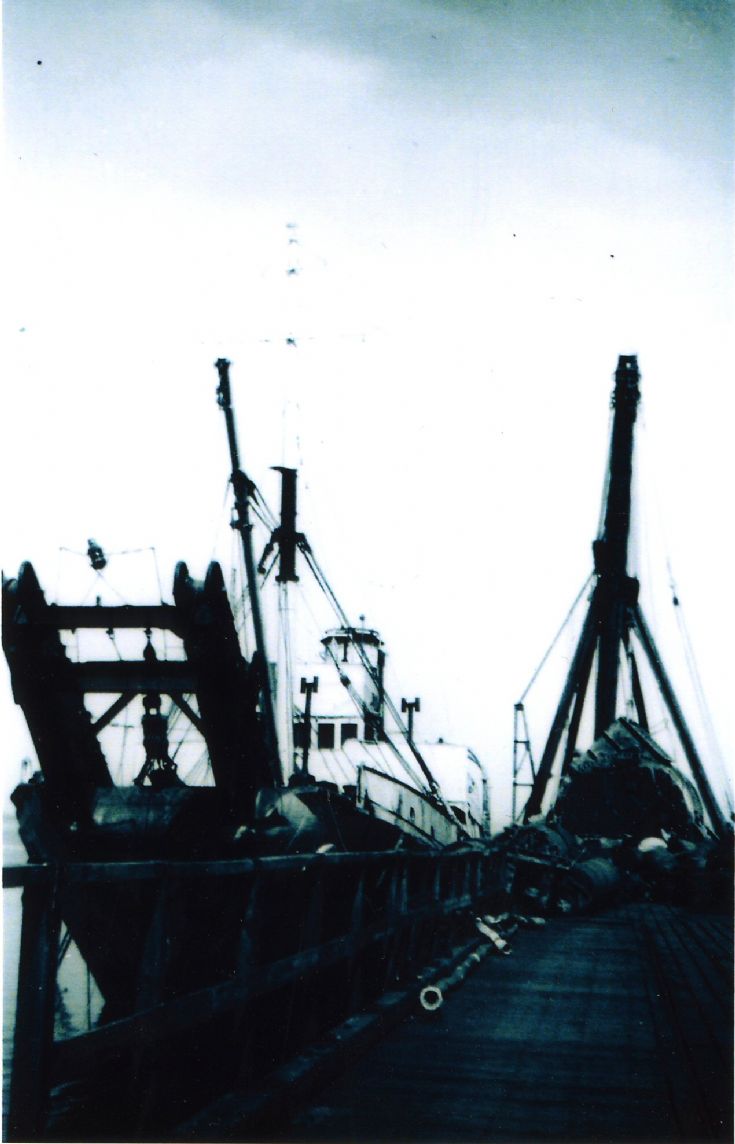 BARNEATH as she was in the early days,She spent some time on HMS VANGUARD before she turned her attention the German ships. Salvage was a dangerous trade, and certainly no less on the BARNEATH. as small boys it was amusing to watch the escapades of moving the ship inshore with a lift of probably up to 70 tons over the bow, after a lot of shouting and bawling and often cursing the winch would be let go rather to fast and the bow would leap in the air till one could see the fore foot. A little Silence period then HMM ! another job well done boys. [Date estimated, was 2007- Steven]

View Large Version
Picture added on 26 December 2007
Related Sites: Longhope Sailing Club
Comments:
I remember delivering coal onboard Barneath, i only hope they sent the gangway to the breakers with it, as it was pretty ropey you might say.
Added by Stewart Taylor on 27 December 2007
I spent most of my Naval career in "Bar" class boats on both the east and west coasts of Scotland and the Med and enjoyed every single minute of the hard graft and cameraderie of the life on "the boom"
Added by Alf Mumberson on 25 January 2009
I was an ERA4 on Barneath 1953/54 as part of my National Service. She worked from Rosyth, Scapa, Aultbea and Campbelltown during my time. The Chief Tiffy was Bill Platt.
Added by John Meiklejohn on 30 June 2009
Allan, your date on this one must be wrong, it would have been 1957-58 that she came to the salvage work, I was one of the crew that went to Rosyth to bring her up, but we had to come back without her as she had been mothballed and the seacocks were plated over, so couldn't steam her up . She was towed to Rinnigal and we removed the seacock valves and spent about 24hours drilling inch holes from the inside, every hole as the drill went through was plugged with a wooden plug by a diver, when enough holes were drilled the valve was reassembled and the diver removed all the plugs from the holes and hey presto we were ready to raise steam..
Anonymous comment added on 03 July 2009
Your quite right 1950 would be too early for her I remember fishing for sillocks off Rinninal pier in the early fifties and there was no Nundy then. The old man got a job on the Barneath and we moved from Orphir back to crystal wells beside Rinnigal pier- I think that would have been 1957-1958 and he had her just a short time before that. I can still mind some o the names of the guys that worked there in the early days. Fellows like Tam the engineer Jimmy Craigie fireman, Jimmy Chalmers. and George and Jimmy Hamilton and Big Robbie Norquoy from Flotta who used to splice them enormous wires with ease.Dont know who you are but please get in touch I would like to hear your yarns about the days of Nundy Marine Metals.
Added by Allan Besant on 06 July 2009
comment on 3rd july was by me, didn't notice no name left....
Added by Jimmy Hamilton on 07 July 2009
After studying the picture, I notice the huge condenser on the pier, this was out of the Vanguard, weighed about 19 tons and all non ferrous, it had been blown clean out of the ship and lay completely clear of the wreck .We accidently fouled a mooring wire on it while mooring over the wreck, Nundy was raging about the time lost getting moored, he sent a diver down to clear the fouled wire and found it fouled on the condenser, we sent down a lifting tackle and had it up and headed back to rinnigal, Nundy beaming, fouled wire forgotten about.
Added by Jimmy Hamilton on 08 July 2009
This picture was taken approx 1960.
Added by Allan Besant on 09 July 2009
We googled this boat and all of this information came up. My dad Jimmy wheeler was absolutely thrilled. He was a morse code signal man on the Barneath in 1946/47.

How can we find out the name of the captain at that time? Thank you.Beverley Pearce

[Over to you, boys...]
Added by Beverley Pearce on 21 February 2010
I found an entry in my mums diaries that the Barneath was in Stonehaven harbour during the week before the Coronation in 1953. I was on it (can't remember - too young!) for a look round she says.
Added by Martin Sim. on 23 September 2011
My father (Walter (Wally) Holloway)served on the Barneath during WW2. I am not sure if this was in the Orkneys or in the Med towards the end of the war. Anyone out there serve with him?
Added by Keith Holloway on 28 November 2011
As part of Nat. Service I served on Barneath 1955/56 until she payed off in the Feb in Rosyth. It was one hell of an experience. After 6 months stoking we had hands like a kangaroo's backside.We were stationed in Aultbea maintaining anti sub.nets before coaling ship in Ullapool then a "speed trial" to get round Pentland Firth to Scapa Flow then down to Rosyth. Little entertainment But! a great time.
Added by Gordon Oxley on 14 March 2014
<< back