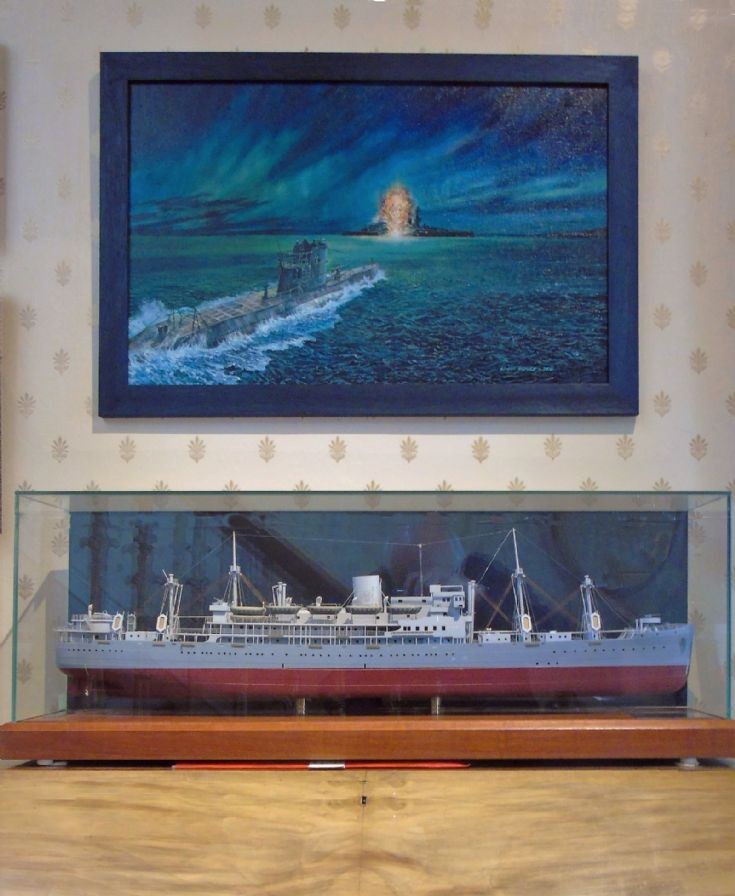 (Hung above a model of WW2 troopship Eastern Prince, previously described on this site)

A recent painting by the artist Edgar Hodges depicting the tragic event that followed so closely on the opening of hostilities in WW2, 77 years ago.
It's about the same number of years since Hodges started drawing and painting seriously, and in 'advanced old age' he shows little sign of slowing down, and none at all of diminishing powers at the easel. He's probably best known for illustrating the children's book series "Thomas the Tank Engine", but he could always successfully turn his hand to anything. His versatility is astounding - people, landscapes, aircraft, famous steam locomotives, Star Trek and Dr Who annuals, anything. His maritime paintings of recent years put him, in my opinion, among the finest exponents in this genre. But he describes himself as a superannuated illustrator who paints for his own enjoyment and gratefully accepts the appreciation of others as a bonus and an encouragement.
He wouldn't count this painting among his very best; he recognises several 'weaknesses' (such as the white water around U47 being too pronounced for the sea state in the Flow at the time) but he was concerned about ending-up with a painting too dark to show any detail when hung on a wall. To me it's splendid: a straightforward depiction of a historic event without over-dramatization or sensationalism.
A lovely man and a top-notch artist - would that my photo did Mr Hodges better justice.

View Large Version
Picture added on 20 September 2016 at 22:56
Comments:
The 'Large Version' is actually smaller than this version, but very much sharper. Why not amend the wording slightly to 'View Better Version' or even put up the better version in the first place?
(There's obviously a technicality I've failed to comprehend.)

[Good point Ian- the non-large versions are all resized to fit, which clearly doesn't help if they are smaller than the default width (which I think is 735px) - Steven]
Added by Ian Hourston on 10 December 2016
<< back