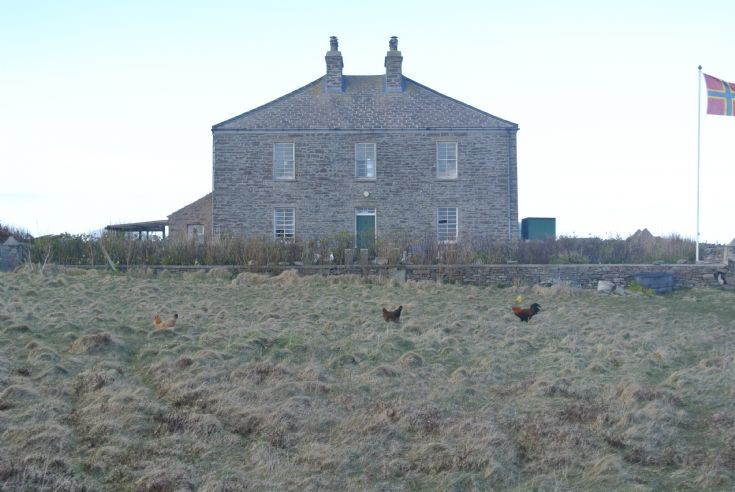 This is the same view of the West Manse, Sanday as that shown in the 1915 photograph, only taken a century later (16th April 2015).

The fence at the front has gone, but the dyke it was on remains. The gateway is no longer there. The windows, though, are the same.

Picture added on 04 May 2015 at 18:41
Comments:
This building looks very like one from my great grandfather's collection but he was the school master of the Central school and our photo is of the Central School Schoolhouse. Are these buildings one and the same? Or was that just the style of building at that time for attracting people to live in Sanday in comfort? All 7 of his daughters were born in that house from approximately 1890 until early 1900s before he moved on to Westray. He may have been the first occupant of the schoolhouse as he was 'in digs' on Sanday before that at Castlehill and married his landlord's daughter!
Added by Alison Hepburn on 16 April 2016
The Sanday school master's house is nearby but it is a different house. The Free Kirk was gifted a patch of land in the middle of Sanday on which they built a kirk, the free kirk manse, a school and the school master's house. The Kirk has entirely disappeared. The old school was torn down after a new and better school building had been built in the 60s. I am not sure if the school master's house is still original. The Manse is but it is no longer a manse but our family's home.
Added by Ute Clackson on 24 December 2019
Thanks for your valuable information. As I always say with Family History, the more you find out , the less you know!
Added by Alison Hepburn on 14 January 2020
<< back