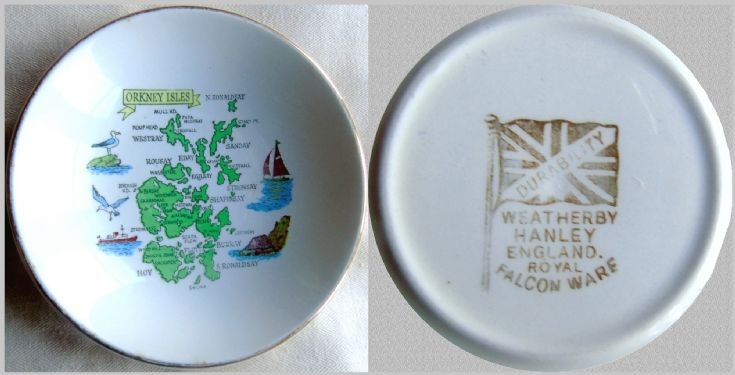 This little (4") saucer seems to have been in my house all my life. But the ship on it, about to enter Hoy Sound, resembles St Ola II more than any other ferry (though with a red hull and funnel, and the flag of France at her stern, she falls somewhat short of being a dead ringer) which would suggest a date in the 1950s. The few placenames the saucer has room for have been somewhat arbitrarily chosen and loosely positioned, but then nobody's going to use it as a road-map.
The maker's stamp on the bottom carries a rather crude - but correctly flown - Union Flag, defaced by the word DURABILITY which has proved to be the least durable part of the saucer.
I imagine these objects were produced in large numbers but don't recall seeing one elsewhere. Being aimed at visitors, surviving examples are likely to be outside Orkney I suppose. No doubt there's a modern equivalent, but today's travellers with their photos of everything (or do they just take selfies?) won't feel the same need for pieces of china.
Picture added on 01 May 2015 at 11:44
Comments:
My mum and dad had one of these too. Not sure if it is still in a box somewhere. I've no idea who or where it came from. Hanley is where some of the Staffordshire potteries were. I visited one there in the '70 to see the Marks and Spencers china being made.
Added by Mabel J Besant on 08 May 2015
<< back