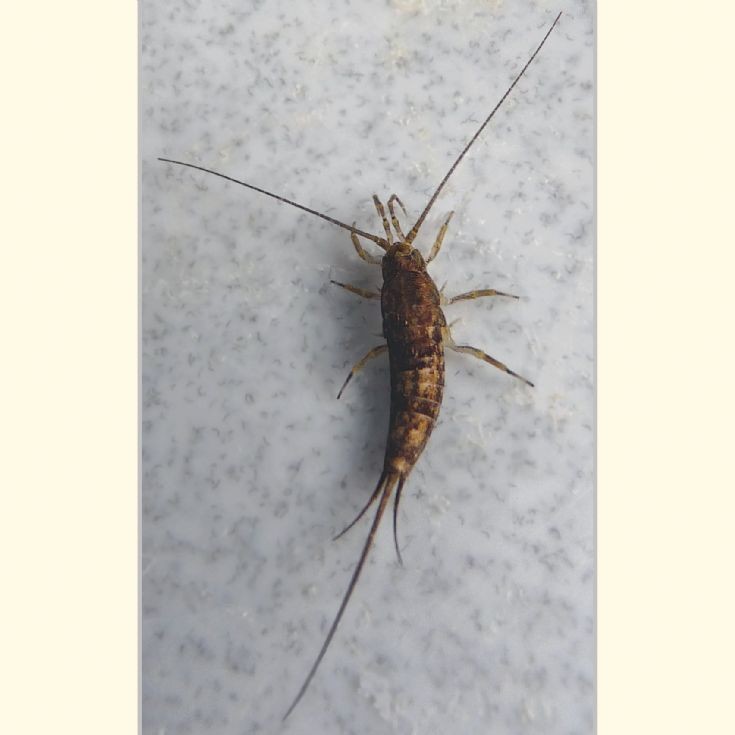 'Forkytail' today 12 Dec 2013
Viewers will be familiar with this insect which is common around Orkney shores and often finds its way into outhouses (and sometimes dwelling houses, as in this case) near the coast. Frequently confused with the earwig, also called forkytail in Orkney, it is in fact not closely related to that insect, nor do the two really look much like each other.
Forkytails are more accurately called Jumping Bristletails, and belong to an ancient order of insects that includes many species. I used to wonder if they were insects at all, since they appear to have eight legs instead of the regulation six, but the forward-facing pair are actually mouthparts (elongated maxillary palps to be more precise).
This specimen was just over 3cm long, including the extended feelers and bristles, but was probably not fully grown. For comparatively small insects Jumping Bristletails are long-lived, averaging about four years, according to the books. They are harmless to humans but their sudden jumps can take you by surprise. (It often looks as if the jumps take the insects by surprise too, for they clearly haven't the faintest idea where they're going to land.)
Picture added on 11 February 2014 at 00:44
Comments:
That's a funny forkytail. Not what I recognise as a forkytail anyway.
Added by W Watters on 11 February 2014
This is actually a Silverfish -Lepisma saccharina.
The scientific name indicates the silverfish's diet of carbohydrates or starches.
Earwigs are commonly called forky tails.
Added by Neil Johnstone on 11 February 2014
Sorry Neil, this is not a silverfish, though a fairly close relative. (Did you ever see a silverfish jump?) A rather basic characteristic of a silverfish is that it is coloured silver. This bristletail is far from silver (unless heavily tarnished). It's also a good deal bigger than a silverfish and tolerates much harsher living conditions.
Willie, you are maybe thinking of the other forkytail Neil and I mentioned - the earwig.
Added by Ian Hourston on 11 February 2014
This is whit wae caal a "spurree", very hermless bits o tings.
Added by Tommy G. on 12 February 2014
That's interesting, Tommy. Gregor Lamb's Orkney Wordbook defines spurry as an earwig or any fast moving insect, but he doesn't include spurry among the dialect words still in use in Orkney. (I confess I never heard the word before now.) Once again there seems to be some confusion between bristletails and earwigs.
Added by Ian Hourston on 12 February 2014
Ian, I stand corrected.
Added by Neil Johnstone on 12 February 2014
I think it’s called a spring tail and is found round beaches and houses
Added by Mary on 29 June 2019
Springtails are much smaller and don't have long forked tails.
Added by Neil Johnstone on 11 July 2019
No, Mary, I'm afraid it's not a springtail.
Jumping bristletail (the term I used above) is probably as good a vernacular name as any.
Added by Ian Hourston on 12 July 2019
While I'm at it, I'll post a (poor, but the best I have) shot of a silverfish to support my comment on Neil Johnstone's contribution above.
Added by Ian Hourston on 12 July 2019
<< back