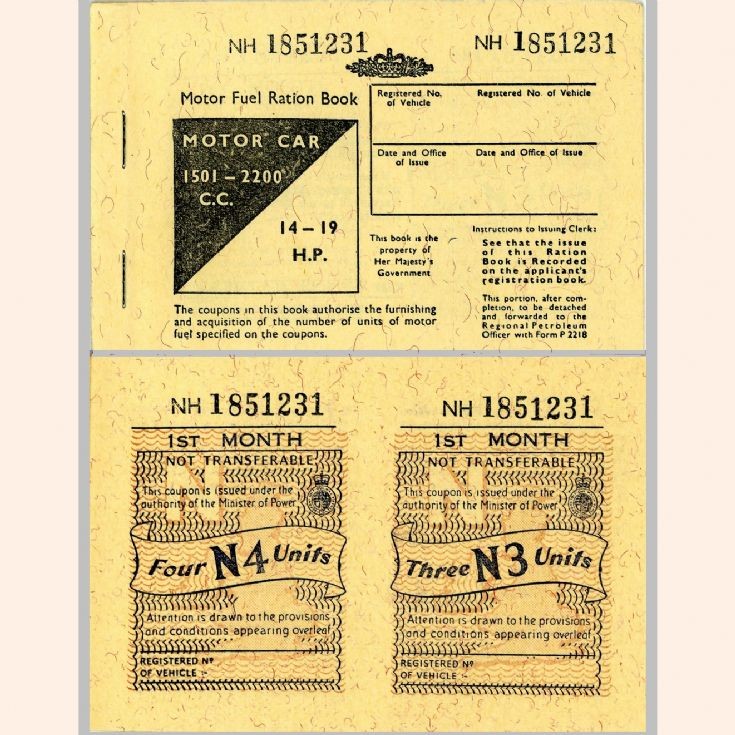 Doom-mongers are suggesting that books like this will have to be brought back soon. This is one of the millions issued in the wake of the Yom Kippur War, when petrol prices were rocketing and Government feared an unmanageable run on filling-stations. In fact formal rationing proved unnecessary and the coupons were never used. My car at the time was a Volvo 121 Estate, just within the lower half of the engine capacity bracket for these particular coupons. I don't recall what N4 and N3 units were exactly. There were also L2 & L1 units. You were entitled to one each of all four kinds per month. Seems unnecessarily complicated, but maybe not. The book was good for 6 months.
I was posted overseas the following year and remember dreading the prospect of paying A POUND A GALLON for petrol on my return to UK (by which time I had acquired a two-and-a-half litre car -such extravagance!)
(Photo taken today 14 May 2012)
Picture added on 23 May 2012 at 07:58
Comments:
I also have my one yet in the house,I think at the time I was running a morris 1100
Added by G.Scollay on 23 May 2012
I cannot remember anything about these. However I was posted in Germany in 73 and did not return to the UK until 78. I was posted to Blandford Forum and when travelling I used to fill up at a petrol station in Oxford. They were selling petrol then at 67P per gallon.
Added by Ernie Rendall on 25 May 2012
Yes Ernie, I came home from Germany about the same time as you, and the doomsayers' prediction about the £1 gallon hadn't materialised. Didn't take all that long to do so though.
Anonymous comment added on 28 May 2012
I have one of the above are they worth anything please
Added by Janice Creamer on 27 October 2014
I'm no authority Janice, but judging by valuations on the internet I'd say a collector of motoring memorabilia might give a few pounds for a book in pristine condition.
Added by Ian Hourston on 30 October 2014
<< back