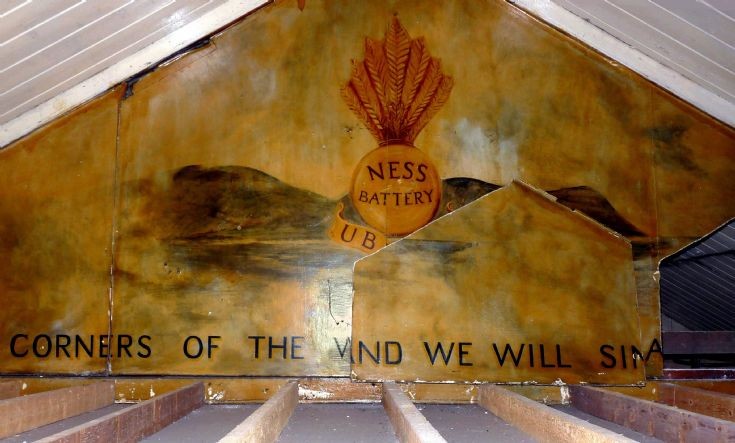 Taken 4 Sep 2010 (one day after the 71st anniversary of Britain's declaration of war on Germany).
A mural in the mess hall of Ness Battery, Stromness, above level of present ceiling. Depicts grenade badge of Royal Engineers, and a caption, disrupted by maintenance work (and lack of a sufficiently wide-angle lens), which in full reads something like 'Come, ships from the four corners of the world and we will sink you'.
All I had was the camera's built-in flash, hence the marked reflected hotspot. Sorry about that.

View Large Version
Picture added on 08 September 2010 at 19:07
Comments:
Ian
Interesting photo, any idea who wrote the words and are they a quote? It looks to me a bit like Eric Linklater in his dramatic/warlike mode.
Added by Jim Eunson on 08 September 2010
"Come the three corners of the world in ships and we will sink them"
Added by Leslie Burgher on 10 September 2010
A slow reader, I didn't manage to absorb all the words by the light of the flash. In the closing lines of Shakespeare's King John, Philip the Bastard says, "Come the three corners of the world in arms, and we shall shock them". The Ness Battery inscription must be an adaptation of that. The chap who painted it may have been a bit of a *astar* too.
Added by Ian Hourston on 12 September 2010
Yes, he certainly was a bit of a star.
Added by Ian Hourston on 13 September 2010
I wonder if there are any old photos of the painted huts in Lyness. Ness mess hut wasn't the only one painted like this. I only know this from family memories, I've never seen any photographic evidence.
Added by Maureen Firth on 14 September 2010
Just a small point Ian but the grenade badge would have been The Royal Artillary not the RE's.
Ness Battery, by it's name was R. A.
Both RE & RA have grenade badges which are slightly different.
Added by PRICE SINCLAIR on 14 September 2010
Quite a large point, Price! Of course you're right. Stupid of me. Apologies all round.
Added by Ian Hourston on 16 September 2010
7 flames = RA
9 flames = RE
Added by Fine Hid on 03 November 2011
I visited this mess hall as a boy soldier from the Yorkshire brigade in the early sixties, this must have been before the ceiling was lowered. We went onto Hoy on exercise and I shuddered as I thought about the history of the Orkneys. We also visited some of the gun enplacements. I have aways thought that the quote was, "They come from the three corners of the world and we shall sink them", funny how memory can remember things wrongly.
Added by Bob Adams on 10 September 2016
<< back