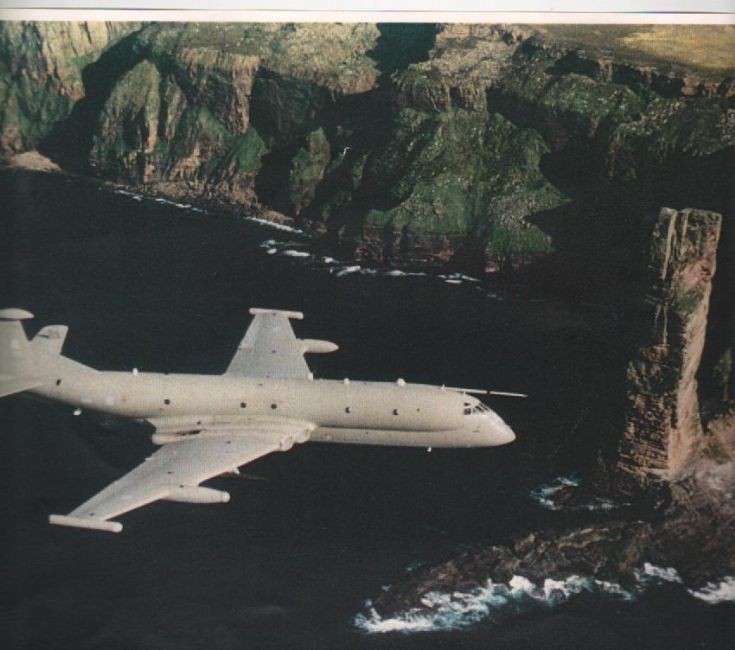 Nimrod passing The Old Man, an aircraft now gone or soon to go from our skies.

The first time that I saw one of these was the day the new Solent class Lifeboat came home to Longhope in 1970. As we crossed the Pentland Firth the RAF did a fly past and we were amazed how slow these giant planes could fly. So now after around 40 years the Nimrod has had its time. I wonder if any of the old "Shackelton" class are still in the air- they had a distinctive drone and were aye to be heard at night. Were they not used as weather planes, or so we were told, and also like the "Nimrods" as search and rescue aircraft?

View Large Version
Picture added on 13 April 2010 at 16:08
Related Sites: Longhope Sailing Club
Comments:
There's at least 1 airworthy Shackleton about to my knowledge and as far as I know they mostly did search and rescue.

Shame to see the end of the nimrods, they certainly made everyone look up when one flew over Kirkwall! I remember standing by the side of the runway at Wick when one was doing a missed approach, the noise when the piolt opened up the throttles to pull up again was incredible!!!
Added by Alistair Foden on 13 April 2010
Where was the camera taking the shot of the Nimmy ?
Added by Gordon Sinclair on 29 October 2012
Above it!!!!!!!!!!!!!!!!! (who's a smart a***)
Added by W Watters on 01 November 2012
<< back