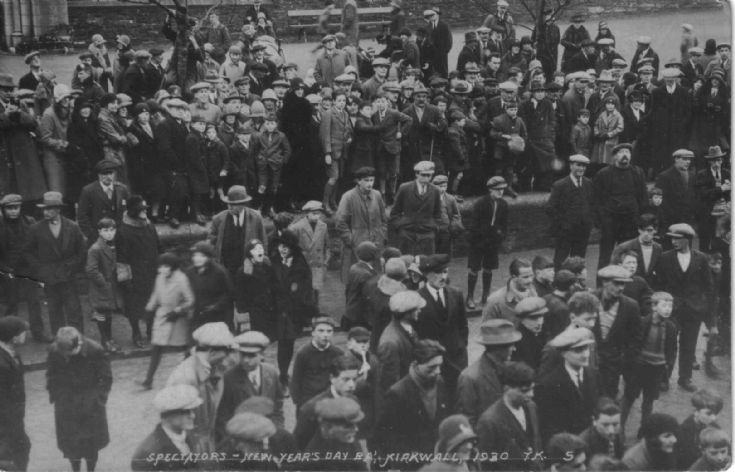 Here is a scanned postcard of the Ba in 1930 by Tom Kent.

The following is taken from a letter from my uncle, Ally Stephen, now in Glasgow to my Dad, William Stephen. I hope it helps identify people.

My comments are in square brackets. Nicknames are as given.

"Standing at the right in front of the dyke, Bob Leask with the hat is speaking to Dad [Alexander Stephen].
Then the boy is Jim Johnstone ("Beefy") next to his father "Big" Danny. Then Peter Harcus and Norman Rosie.
The next 3 are unnamed but the fourth is Arthur Eider?. To the far left is Herbert Borwick. "

"Then in front of Alexander Stephen and Big Danny - Alex Groat, Tubber Bews and Bobby "bats face".
Move to the left: Taylor Norn, Old Jimmy Keldie, and in front of him John ????[can't decipher].
Go left to Jimmy Kelday's son with the school cap and a boy Aitken?

View Large Version
Picture added on 14 October 2006
This picture is in the following groups
The Ba
Related Sites: Kirkwall East Church, Milestone Community Church
Comments:
Those boys were tough back then wearing their short breeks on New Year's Day
Added by Doreen (Stephen) on 09 November 2006
Hi Karl,
I think that my Mum (Margaret Stephen) is your cousin. My Grandfather is Alexander Stephen and Alec Stephen my Uncle.

I'd love to be able to pick out my Grandad from this photo but can't work it out. If you have any more old photos of the Stephen's I'd love to see them.

All the best
Brian Gray

Added by Brian Gray on 05 December 2008
sent a copy of this photo to my mother, May Rendall (b. Kirkwall 1927) who said that the man described as her father, William, brother to Robert Rendall is not him, but if you travel to the right of the photo where a man is leaning forward,his right shoulder facing us and behind a boy and a girl on the wall, then that is her father, who later became the postmaster.Thank you for the photo as she has taken great pleasure in it.
Added by Sheila Roberts on 06 April 2013
Hello ..
My name is Danielle Stephen the granddaughter of Clifford Stephen and the great great granddaughter of Alexander stephen who married Margaret Stephen (Kelday)
My grandfathers father was Jim Stephen who died in 1978.
I have lots of pictures ...
Are any way related ?
Added by Danielle Stephen on 06 August 2016
Is this feed still viable ?