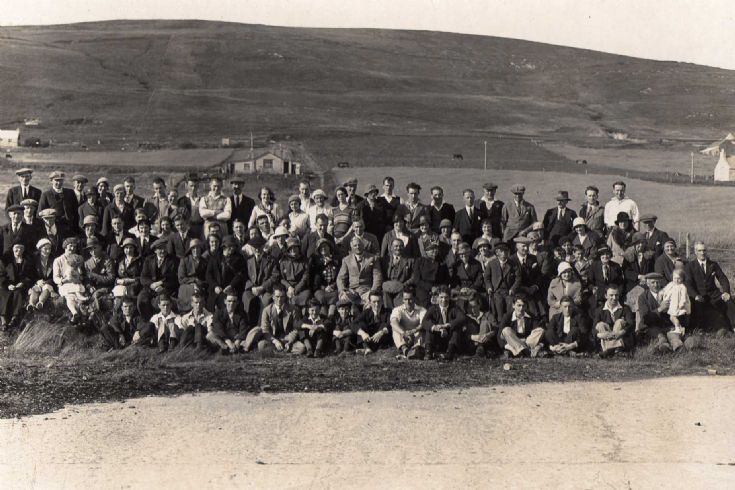 Paul writes:
I attach an ideal photo for your new "open a larger version" facility. It shows a Garden's staff outing to Houton in, I would guess, 1933. Having already sent it to Peter Burges and Vi Buchan via Isobel Irvine (see comments on other Garden's photos), I have a few names. Front row, 5th from left, Jim Cromarty. Second front row, from left, 2nd possibly Barbara Sclater, 3rd Georgetta Flett with daughter Pam on her lap, 4th James Flett, 5th Celia Sclater. Mrs Buchan says the bare-headed woman between and behind the cloche-hatted women 7th and 8th from the right is Jessie Tait. 12th, in light suit and silver hair, is Sir Gilbert Archer, the boss of Tods of Leith who owned Garden's. 16th, in cheese-cutter cap, is the diminutive figure of John Mooney.

Peter's comments are: "Back row extreme right is Geordo Sinclair, no6 along from him is Jim Donald and then no6 along from him is John William Borwick and to his right in the white hat Mimy Omand and to her right is Mrs Jim Leonard (Jim worked in the garage) Keep going left along the back rowNo5 from MrsL. is a lady called Work who was married to Jim Logie who is standing below her left shoulder. Now carry on slightly to the left and slightly lower down, the lady with the lower left half of her face obscured by the man in front , I'm almost sure this is my mother.
In the middle row3rd man in from the left is Andrew Sinclair (Geordo's brother) and the man sitting to Mooney's left is Bob Cumming.
Front row seated from the right (Crossed legged) no 5 is a man called Sutherland, and no 7 a man called Muir."

View Large Version
Picture added on 04 October 2006
Comments:
i think seated front row 8th from the right is my grand father Jamie Eunson
Added by Stuart Muir on 19 November 2006
Not sure when my father, Willie Inkster, started there but looks like him fourth right in the back row.
Added by Barbara Johnston on 20 November 2014
<< back