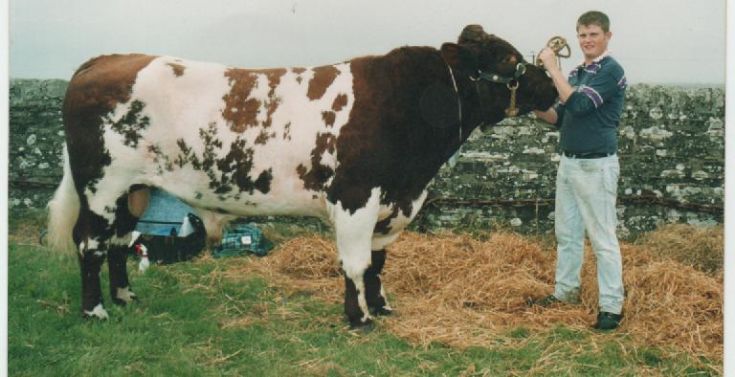 A Bull wae used tae have

You ken I am no one tae boast or blow, bit this wiz whur bull. We returned him to the man who bred him as he said if we were getting rid of him he would like to own him again.
Well the breeder took him to shows all over the country in 2007.
He won the supreme champion in the Shorthorn class at the Highland Show, the Yorkshire Show and then went on tae take the supreme at the Royal Show in Warwickshire.

We kept a lot of his females and they are breeding well.
I could go on bit I think thats enough bragging fur wan day!!
Oh the ither male in the photo is whur son Matthew .
Picture added on 14 December 2008
Related Sites: Longhope Sailing Club
Comments:
Aye he's a bit o a bull tae, bit me thinks a recent marriage might tak the points off his horns eh!
Added by Graham Brough on 24 March 2009
Matthew has just been to this bull in Warwickshire "Mark Homes" who bred him and later bought him back still has him and he is still serving a few cows aged about 13!. Ah the Waas males were aye frisky that way!!.
Added by John Budge on 30 June 2012
<< back