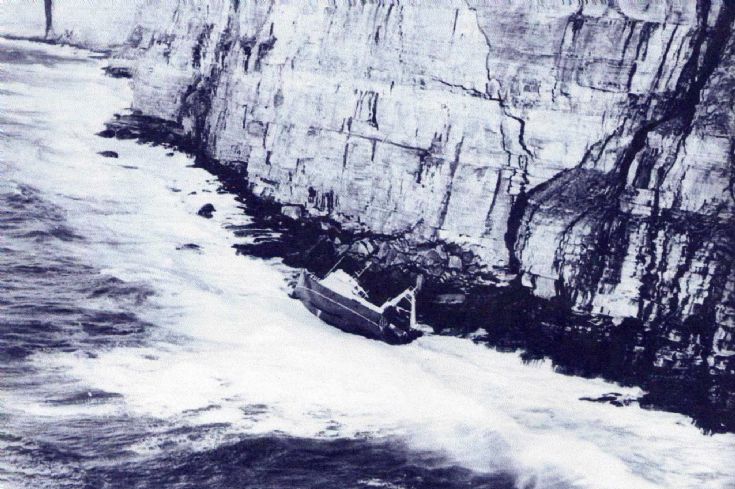 Belgian trawler "Lans" wrecked on Berry Head, Hoy in I think December 1976.
The crew of nine were rescued in a brilliant operation by a Sea King helicopter commanded by Flight Lieut. Dave Cosby, who now resides in Stromness.
During the operation, the rotor blades were barely twenty yards from the face of the crag and the updraught owing to the gale force winds, threatened to dash the aircraft against it.

View Large Version
Picture added on 24 March 2008
Related Sites: Longhope Sailing Club
Comments:
This was indeed a briliant piece of flying by Dave Cosby and his crew.
One or two things about this event Fred, it was not a large Sea King helicopter but a much smaller type. The chopper only took two lifts and then transferred them to us on the lifeboat.
We were told that the engines from the helicopter had to be replaced such was the strain they had taken- the pilot was flying down low to get the lift and then when the sea broke over the vessel he was rapidly climbing before the spray hit the machine. He did a briliant job.
We along with Stromness Lifeboat tried to get close enough to work a surf buoy rescue but due to the sea and tide conditions this was not possible. Looking at the photo taken next day its a damn good job that we didnt as Im sure the outcome could have been not so good!!.
One of the Stromness crew had his arm badly broken when a winch handle struck him.
We took the trawler crew to Stromness to the care of the Shiprecked Mariners Society.
The trawler broke up very soon, she was almost new at the time of the stranding.
Not many vessels get away from iron grip of the Hoy coast!
Added by John Budge on 26 March 2008
Date was Dec 74. My son, Kevin was born Jan 75 and she was wrecked a week or 2 before he was born.
Added by William Watters on 26 March 2008
I have been informed that this incident happened in December 1975. This is probably correct and I should know, as I was on the " Ola" that day and remember seeing the lifeboats etc. whilst we were on passage to Scrabster. Flight Lieut. Cosby was based at R.A.F. Lossiemouth at the time.
Added by Fred Johnston on 26 March 2008
Willie Watters was correct, it was in the early hours of Dec 21st 1974 she ran ashore. Longhope was already on her way when we launched (Stromness) at 01:00 hrs
Added by Stewart Taylor on 26 March 2008
I stand corrected. I was sure that I was on the Ola 3 at the time, but it must have been the last few weeks of the Ola2.
Added by Fred Johnston on 26 March 2008
Taken from the service board in the boat shed "Dec 21st 1974 Belgian Trawler "Lans" landed seven"
Added by John Budge on 27 March 2008
Another point to mention on that rescue was that during the casualty transfer to the lifeboat the helicopter winchman got his harness snagged on a hatchcover locking handle and almost changed the rescue to a very different situation.
Following this incident our Hon Sec Jackie Groat informed the R N L I of the problem we had and from then on all lifeboats had hatch handles modified to the type used today.

Another modification to rescue brought about by our station at Longhope was that following the stranding of the "Bracon Moor" on 5th Jan 1930. The skipper lost his life as he was unable to hold himself onto the surfbuoy and a recommendation from the cox was that a crutch strap be fitted to all breaches buoys. From then until today it is the normal type used.
Added by John Budge on 28 March 2008
Sadly, Dave Cosby died suddenly on Thursday April 9th 2009. A very modest man, I'm not sure how many would know that as a result of the rescue of the crew of the "Lans" he was awarded the Air Force Cross by HM Queen at Buckingham Palace.
Also decorated (AFC) was Master Air Load Master (MALM) Peter Barwell and Flt.
Lt Charles Taylor, who received the Queen's Commendation for Valuable Service in the Air. They were based with 'D' Flight of 202 Squadron at RAF Lossiemouth and flew a Westland Whirlwind. The citation stated: "Flt Lt Cosby decided that the only
way to save the crew was to transfer them one by one to a lifeboat standing
200yd off. Nine times he took the aircraft extremely close to the cliff
and hovered for MALM Barwell to recover the trawlermen. The rescue took 45min and only the superb flying skill of Flt Lt Cosby and the excellent co-ordination
between him and the winch operator, Flt Lt Taylor, enabled the operation
to be completed safely."
This was but one of numerous SAR operations flown by Dave (both on Whirlwinds and Sea Kings) whilst stationed at "Lossie" - a number of which demonstrated courage and skill, both in mountains and at sea. A true hero who will be remembered by many both locally and in the world of flying.
Added by David Dawson on 10 April 2009
Knew him moderatly well....a genuine gent .. a great loss to our community... RIP
Added by Mark Ridgway on 13 April 2009
I can say the way the helicopter was handled that morning was superb. Our hearts were in whur mooths. I spoke to Dave about it some time later but he brushed my words of praise aside saying it was what they were trained to do.
I did not know the man very well but what he and his crew did on that rescue was at the very edge of safe working.
Funny thing sea rescues, some times the people who are plucked from almost certain death never forget, others you never hear of again, as in this case. A lot of people were involved Coastguards they walked up to the top o the Berry, no mean feat in the dark with all their gear, two Lifeboats, an injured man on the Stromness boat with a badly broken arm, Shipwrecked Mariners looked after the survivers and returned them to Belgum and not a word from them that I know of.
May Dave rest in peace, we know what he did for others that night and I'm sure on other missions in his time with the RAF search and rescue.
Added by John Budge on 14 April 2009
That's one of our best sources of South Isles and maritime history gone to the great harbour in the sky. Thanks Fred.
Added by W Watters on 26 March 2014
The skipper left a deckhand on the bridge while he was salving a stearingproblem in the afterdeck wich was fatal seeing the circomstances Dec 1974 The owner was a good friend and left the ship for the hollidays he never came over it
Added by Pat on 29 September 2014
for the complete info dig in tho the vliz oostend you will find more on there website about 0288
Added by Pat on 03 October 2014
up on the loss of the lans the owner sailed back to iceland with 0.81 john wich proved him a topskipper his name michel anseeuw
Added by Pat on 04 October 2014
There is also a book published about research of trawler's losses; depot number 2002/0248/13 concerns Belgian fleet.
Added by Pat on 04 October 2014
I think my late father jimmy Mowat was on the Longhope lifeboat on that rescue and there is green twine on the claes pulley above the Doric stove in Affrigate to this day..He told me that a few years ago.
Added by Magnus mowat on 16 January 2020
<< back